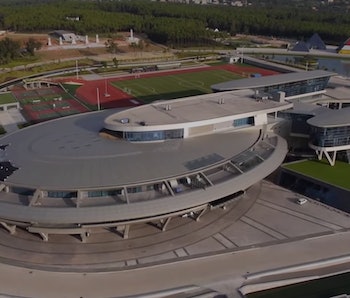 The man behind the Chinese office built to look like the USS Enterprise has finally revealed which version of the ship his structure is based on. And it's not the one you think (unless you read the headline, in which case it probably is).

The Wall Street Journal reports that NetDragon Websoft founder Liu Dejian patterned the headquarters of his company on the USS Enterprise NCC-1701-E. That’s the ship captained by Jean-Luc Picard through the last three Next Generation movies. It’s a strange choice if you consider it.

There are a lot of ships that would be easier to repurpose into office space. The Death Star would be fairly efficient if it weren’t for the rolling issue, and the Borg Cube could pass unnoticed in an office park. The Cube would also function as an ironic commentary on the worker’s loss of self - so there’s that. Here are NDG’s thoughts.

Still, tech workers of the world would probably prefer a holodeck to a foosball table. No one could blame them.