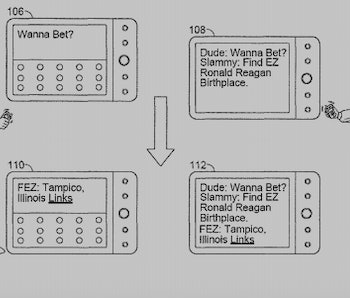 Google has patented a way to end text-message debates. The process works like this: You get in an argument with your friend about some trivia ("Emperor Palpatine was totally played by a woman first") and after enduring the usual ripostes ("bullshit u ewok"), you text a keyword that triggers an automatic answer (Google: "Palpatine's first appearance was an old lady with chimp eyes"). Debate over. Google for the win (GFTW).

The patent, which a Google rep told Quartz may or may not bear fruit, highlights the search engine's growing confidence in the ability of its algorithm to always be right. The proposed text messaging service includes links, presumably as sources, but the implication here is that Google trusts its ability to find the perfect response or its ability to develop that ability.

Either way, that's a bigger piece of news than the messaging tech finding its way into today's ledes.

“Won’t Be Wrong” a far cry from Google's famous warcry of “Don’t Be Evil,” but it is very much in line with what’s etched in Google’s slabs of stone: Democracy on the web works.

The unrestricted internet is, by and large, a democratizing force for information. Google reliably feels its algorithm can skim the correct answer to a question that’s democratically risen to the top. It's a shift long in the making. The search engine giant buried its "I’m feeling lucky" search in 2012 in favor of top results.

To settle debates, the onus is on Google to load the algorithmic dice. Google is very confident in its ability to load the dice — which it can do, incredibly well. This works both ways, however: Ask Google to settle a debate about details of CEO Eric Schmidt's life, and the arbiter might not be able to help you out. As another one of Google’s tenets states, there’s always more information, which is - at least in part - why we have debates in the first place.

That said, we don't need to have them via text. We'll give Google that much.