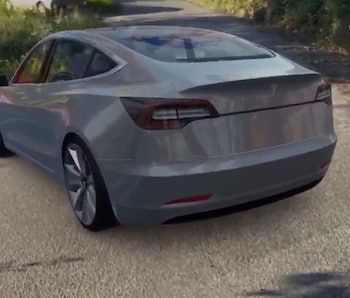 The Tesla Model 3 is perhaps the most important launch in the company’s history, but customers looking to buy Elon Musk’s upcoming $35,000 car have a long wait on their hands. Although Tesla is expected to start deliveries of its cheapest ever car later this month, orders placed now are expected to arrive around mid 2018 or later. Fortunately, help is at hand for those that can’t wait that long, thanks to the new augmented reality features found in iOS 11.

The next software update for iPhones and iPads, set to launch later this fall, introduces a new ARKit set of tools for developers to produce their own apps that combine the device’s real world camera feed with virtual objects. Jelmer Verhoog, a user experience designer from Oslo, has been playing with the beta version of iOS 11 that launched last month and created an app that can place a virtual Model 3 in your garage, driveway, or anywhere else you feel like.

The video, posted on Monday, gives an impressive preview of how the Model 3 will look in the real world:

“Filmed directly through an iPhone 7 it [felt] surprisingly real to walk around the car,” Verhoog said on the video’s description. “I added support to play with the lights, control it (by swiping the iPhone’s touchscreen) and configure it (just colors for now). Next would be to add custom wheels, more advanced lighting & reflections (especially the rims) and opening doors and checking out the interior would be possible as well.”

As Tesla has still not confirmed the final list of optional configurations for the Model 3, Verhoog has taken some educated guesses at the color options. Tesla has been testing the Model 3 on the streets of California since March, and eagle-eyed fans have spotted all five colors depicted in the video (black, blue, red, silver and white).

It’s impressive stuff, but like iOS 11 itself, the software is an early version of what’s possible. Verhoog claims that if Elon Musk or Tesla approves of the app, he’ll develop a more polished version.