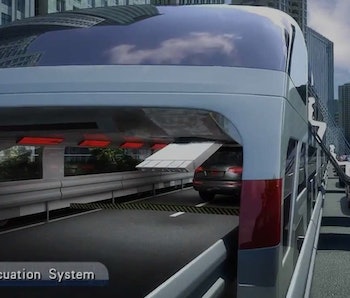 Police in Beijing have arrested 32 people in connection with the straddle bus project that was decommissioned last month. The bus, which started construction in July of last year, promised to move passengers over two lanes of road traffic by following a 1,000-foot track down the street. Unfortunately, it never lived up to the hype. Among those arrested is Bai Zhiming, the 47-year-old CEO of the Transit Elevated Bus Company (TEB) who led the project’s development.

BBC News reports that the arrests were made over illegal fundraising. Zhiming was also the founder of Huaying Kailai Asset Management, and the other 31 arrested were employees of his company. Investors were offered returns of 12 percent on their money, numbers that roughly match the returns seen in the peer-to-peer lending industry. Local media claims the project was a way of getting investors to put their money into financial products rather than funding the bus itself.

The $4.5 million solar-powered electric bus was an ambitious project. It stood 16-feet high, 26-feet wide and extended 72 feet, capable of carrying 1,200 passengers at once. It drove 330 yards back in August on its first test run, but the fact that no further tests took place raised suspicions that the bus was a dud.

A number of questions went unanswered during the project’s short lifespan. What if a car collides with one of the sides, for example? Or how will drivers react by suddenly finding themselves enclosed in a moving tunnel?

Another factor that raised suspicions was that the bus looked the same as it did back in 2010 when its inventor first revealed it to the world. A test run was canceled amid safety fears, and the project looked doomed until Zhiming stepped in. Zhiming, who had no prior experience in mass transit, reportedly raised $26 million for the project through his asset management platform, but in August 2016 one executive at the company claimed that over 200 investors had requested refunds.

It’s not the first time a straddle bus has been proposed, but the failure surrounding the Beijing project may deter future investors who want to avoid getting burned in the same way.