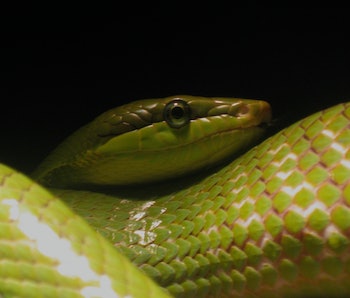 The headline on CNN’s article on Thursday was the stuff of ophidiophobe nightmares: “Snake bites are on the rise in the U.S.” Already, wild venomous snakes sink their fangs into some 7,000 to 8,000 Americans each year, and about five of those bites end up being fatal. In the article, the alleged rise in snake bite rates was blamed on rising temperatures causing snake populations to travel north, where they have a better chance at survival.

But whether snakes are really biting more often — and whether global warming actually is to blame — is up for debate.

It was Dr. Joann Schulte, a North Texas Poison Control Center epidemiologist, who said in the CNN article that “over the past few years, the numbers of snake bites have been rising by maybe 100 to 200 a year” and theorized that because of global warming “the snakes can do better further north.” But, as the article later pointed out, there’s no scientific data to support this claim. However, that doesn’t mitigate the fear that Schulte’s claim raises. The real issue, Auburn University assistant research professor of wildlife, ecology, and conservation David Steen, Ph.D., suggests to Inverse, is that humans are really bad at interacting with snakes.

“I also wish more outlets would make clear that it’s not as if 7-8 thousand people are just minding their own business when they are bitten by a snake,” Steen said in an e-mail. He’s irritated with the “popular narrative that snakes are generally more dangerous than they truly are,” and rightly so. This negative perspective of snakes is what leads to the proliferation of an argument like Schulte’s, which, being based only on anecdotal evidence, is flimsy at best.

Yes, snakes are sensitive to weather and climate. As ectotherms (which used to be called cold-blooded), their internal body temperatures rely on the temperature of the external environment, Steen explains. But they use a variety of behaviors to deal with shifts in weather, and migration to cooler areas is only one option. “It’s a simplification to suggest that there is a clear relationship between rising temperatures and how snakes will respond or that we know what that relationship would be,” he says.

But the greater misunderstanding is the idea that more snakes means more snake bites. While it’s reasonable to assume that increasing numbers of snake-human interactions will result in a higher number of bites, it’s not correct to assume that those bites are inevitable, or solely the fault of the snake’s. Like sharks unfairly maligned because of films like Jaws and the existence of Shark Week, snakes have been stereotyped as evil aggressors since the dawn of Judeo-Christian tradition, but in reality they generally only bite when they feel threatened.

Some snake experts, however, would argue that snakes are always threatened because humans are constantly encroaching on their territory, as the Advocates for Snake Protection pointed out on Twitter on Friday.

Steen suspects that the general number of venomous snake bites that happens each year is actually lower than the rate reported by the CDC, chalking up the discrepancies to mistakes people make when identifying bites from harmful versus harmless species. “The identifications associated with the reported bites are not necessarily confirmed by anyone,” he points out.

But the most important thing to consider when assessing the human risk of getting bitten by a snake is whether humans are actually asking for it. He’s written about it before, with annoyance, on his blog, noting that the people who get bitten generally include:

Avoiding direct interaction with snakes, of course, can’t always be avoided, especially if they’re being ousted from their natural habitat or encroached upon in their homes, for example, by hikers in the woods. Humans should certainly protect themselves, notes Steen. But it’s perhaps even more important to consider who the aggressors really are in the the battle between snakes and humans.

“Referring to snakes as ‘deadly’ doesn’t make a lot of sense to me,” he says, “unless we also refer to dogs, cars, and a host of other things as deadly as well.”