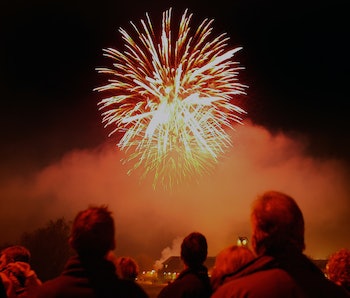 It’s 9 p.m. on the Fourth of July, and his fireworks show is about to start. He’s been prepping since the early morning — unloading the truck, cleaning the “guns,” laying out hundreds of aerial shells, checking the firing cables — and he’ll be up until sunrise. All of those hours of work make mere minutes of pyrotechnics, but it’s worth it: He lives for the adrenaline and the roar of the crowd.

That’s the annual experience of Mike Tockstein — head of the online fireworks training platform Pyrotechnic Innovations — on the Fourth of July, which he describes as “the flagship of a pyro’s year.” In the fireworks community, “pyro” means pyrotrchnician, not pyromaniac; but any shooter needs to access a small bit of mania to withstand the long and tedious labor.

It’s hard to make a living shooting fireworks, so professionals often regard it as a hobby; and the hobbyists are often as devoted as professionals, carefully training themselves and investing as much money as they can afford to build up an amateur stockpile. They join clubs, attend conventions (which “promote the fireworks culture across the country,” says Tockstein), and watch shows featuring the latest effects online.

The community is tightly knit: “If you do fireworks in one state and you happen to be talking to a guy who does fireworks in another state, you’re instantly part of the same community and you have a lot of shared experiences to exchange,” Tockstein tells Inverse.

When a fireworks enthusiast sees a show, it’s a different experience than it is for the uninitiated. A well-trained eye knows which effects are new and has a sense of the amount of work that went into making each individual firework; it appreciates the “choreography” of the fireworks and notices whether they are evenly distributed across the sky.

How do people build up this detailed knowledge, or even get involved with fireworks in the first place? Often the passion is passed along through family and friends; that’s how Gary Allen developed his, though it was almost ruined by a Fourth of July accident — a fireworks shooter’s nightmare.

“My father was shooting artillery shells when a manufacturer error in one of the mortars’ fuse caused it to shoot up nearly instantly after being lit and caused it to explode right in his face,” Allen tells Inverse. “He lost his right eye that night and had shrapnel implanted into his skull.”

Allen was too young to remember much of the incident, and couldn’t help but still marvel at the lights, sounds, and colors of fireworks as he got older; he gradually started shooting them in secret with his brother, “doing exactly what our dad had hoped we would never do,” he says, and “getting good at it.”

Today Allen no longer has to hide his hobby, and he and his friends are all the more passionate about it. He puts on unofficial shows every Fourth of July in his Tennessee county and galvanizes neighborhood folks to take part. He learned most of what he knows through watching YouTube demos, talking to store owners, and experimenting; he still lights his fireworks by hand, but plans to start using the “FireFly” app as an wireless firing system.

Here’s the finale he put on last year, which took between two and three hours to set up and used about $600 worth of firepower.

“In the moment when you finally set it off, the thrill is amazing,” Allen says. “When I hear other people cheering and see children jumping around with excitement, and knowing I have a part in instilling that wonder in them, it’s an awesome feeling.”

“Sometimes the next day, when all is said and done, there’s a feeling of being burnt out,” Allen jokes.

Tockstein agrees. “Actually, I love July 5th,” he says, laughing. He and his crew get home around 5 or 6 a.m. the night before, but make sure to spare a few minutes for their annual chili dog celebration before going to bed.

When asked whether that meal tastes great after nearly 24 hours-worth of manual labor, he says, “Oh, you have no idea.”