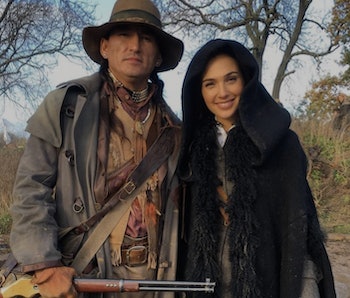 When Chief and Diana Prince first meet in Wonder Woman they shake hands and speak in a language that isn’t subtitled on-screen. In early June, Indian Country Today expanded on the glorious Easter egg, explaining that the two exchange words in Blackfoot, an indigenous language spoken by first nations in southern Alberta, Canada, and northern Montana.

And it gets even cooler: Chief, played by Eugene Brave Rock, introduces himself as Napi, known in Blackfoot culture as a demi-god, trickster, and storyteller. Looks like Diana Prince may not have been the only non-mortal on her own team — and she may have known.

Napi — also known as Old Man — is a fixture in Blackfoot stories, and is known as a troublemaker but also a teacher and helper to people. Napi also had a hand in the creation of the world and the people who inhabit it.

When asked on Twitter by io9 Saturday whether Chief is in fact the Napi of Blackfoot legend, Brave Rock confirmed he is.

It appears that Napi was also a very intentional inclusion, leading to speculation as to whether the character might yet have a bigger part to play in the DC Universe.

While Wonder Woman has already been lauded for its feminist take on the superhero origin story, it’s also great to see an indigenous character receiving some thoughtful representation within the genre.

More like this
Entertainment
7 hours ago
Harley Quinn Season 3 could fix a major Batman controversy, trailer hints
By Eric Francisco
Entertainment
6.14.2022 4:50 PM
A Joker 2 musical would actually be great — here’s why
By Dais Johnston
Entertainment
6.16.2022 11:30 AM
30 years ago, Tim Burton made the sexiest and most sinister superhero movie
By Mónica Marie Zorrilla
Related Tags
Share: