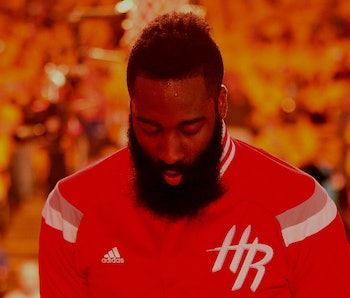 Lil B is an Internet-famous rapper from Oakland who splashed onto sports pages a couple years ago by "cursing" Thunder star Kevin Durant. Given that Durant has been on and off the court since the time the "curse" was placed — among other misfortunes — fans took hold of the concept that the Based God's curse is real. Lil B eventually capitalized on the attention:

Now, Lil B has accused James Harden of stealing his "cooking dance," a move that Lil B popularized in the earlier 2010s. Now, the whole league is scared of getting cursed, given that Harden's last-second effort to tie last night's Western Conference finals game fell short.

This hit the ESPN front page this morning:

The Hawks got out in front of this:

If I were the Rockets, styles, I wouldn't really be worried. Here's my thing — Harden's dance isn't even the cooking dance! It's kind of a hybrid of styles, one maintained by Houston rapper Chedda da Connect (who Harden is paying homage to):

Is the “flick of the wrist” indebted to the cooking dance? Is this curse possibly being promoted by Lil B cuz it only extends Lil B’s visibility? Is Lil B in on the joke? All things yes. But this whole thing is firing up the Internet way too fast.

Harden's dance is not the cooking dance. I'm a dance reporter, and this is my final conclusion.

More like this
Gaming
Jan. 25, 2023
"Mindboggling" Launcher layoffs prompt outcry and tributes to WaPo gaming vertical
By Jess Reyes
Entertainment
Jan. 27, 2023
Onyx the Fortuitous and the Talisman of Souls is a cringe comedy as overlong as its title
By Andy Crump
Gaming
Jan. 22, 2023
OGL 1.2 update: The battle for D&D's future has only just begun
By Corey Plante
LEARN SOMETHING NEW EVERY DAY.
Related Tags
Share: