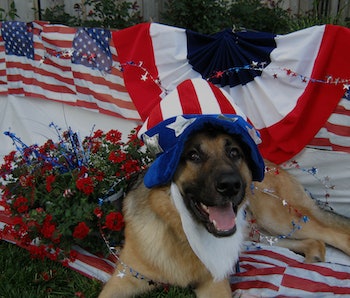 On the Fourth of July, fireworks cause more dogs to escape than any other point in the year. While thunder and lightning present a constant source of stress and terror for your pooch, fireworks — especially those that detonate closer to the ground — fill the night sky with light and noise that torture poor pups.

Here’s why: The sudden, loud noises activate dogs’ sympathetic nervous systems, the same mechanism that exists in people and is responsible for our “fight or flight” response to sudden, stressful, or threatening stimuli. Fireworks bring dogs into a temporary state where their bodies go into overdrive so they can escape danger. It’s the same biological response that they would have in the wild if a predator started to chase them.

Dog personalities also play a surprisingly important role: If your dog is fearful, stressed, or aggressive on a regular basis, then you should definitely be ready because those dog personalities are more likely to panic when the fireworks start.

Thankfully, there are ways to help pups chill.

An easy fix is taking your dog for a long walk before the festivities begin — if they’re tired, they’re less likely to be frightened and run away. Also, make sure any unscreened windows in your home are shut. If you have a big dog, you may not want to rely on the screen and shut your windows anyway; statistics from the American Society for the Prevention of Cruelty to Animals indicate that veterinarians see an inordinate amount of cases of high-rise syndrome — serious or fatal injuries suffered by pets who jump out of windows — around Independence Day.

You can also prepare in advance by training your dog out of its fearful response to noise through some canine classical conditioning. In the days or weeks leading up to Independence Day, play the sounds of fireworks, thunder, or other loud noises while reassuring your dog that the world isn’t ending. Pair these scary noises with positive experiences like treats or belly rubs so that your dog may become more comfortable with them over time.

Other potential solutions — like changing diet, dog clothing, and even medication — might help, though these mini-experiments should be handled carefully. And while lots of people claim they work, the actual data remain inconclusive. Which means unfortunately, the best cure for very good pups may be a comforting belly rub, soothing shushes, and an early bedtime.

More like this
Science
Jan. 29, 2023
Are coyotes dangerous to dogs and cats? Here’s how to keep your pets safe
By Tara Yarlagadda
Science
Jan. 21, 2023
Plague study complicates a commonly held belief about the Black Death
By Samuel Cohn, Philip Slavin and The Conversation
Science
Jan. 17, 2023
Why can’t I understand my dog? Recent research may offer an answer
By Tara Yarlagadda
LEARN SOMETHING NEW EVERY DAY.
Related Tags
Share: