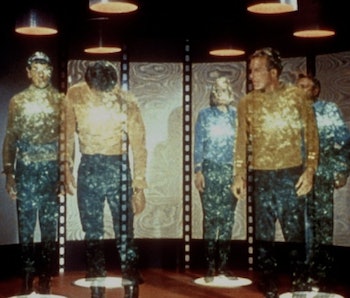 The transporter room of the starship Shenzhou is the best way for Captain Georgiou and Michael Burnham to beam-down to strange new worlds. But don’t expect Scotty to be doing the beaming-honors. A new photo from Star Trek: Discovery depicts a transporter room unlike any seen on Trek before.

On Thursday, EW released another new photo from Star Trek: Discovery, this one showing-off a new style of transporter room. Because Discovery takes place in the 2250s, the transporters are fairly standard aboard Federation starships. This is in contrast to the 22nd century of the show Enterprise, in which the technology was still new enough to worry various Starfleet crew members. Even in the 23rd century, many officers — notably Dr. “Bones” McCoy — positively hated using the transporter to get around. “I signed aboard this ship to practice medicine, not to have my atoms scattered back and forth across space by this gadget,” Bones famously said in the episode “Space Seed.” Is Captain Georgiou similarly reassuring Burnham about the safety of the transporter in this scene? (We would love it if Burham is is cranky about beaming.)

Because many fans have theorized the Discovery and/or the Shenzhou are on a secret mission, its possible this is a different kind of transporter than what has been previously depicted. This time, there are giant round-things behind the crew members about to be beamed. To borrow a question from Doctor Who; “what are the round things?” Best guess? Those are part of the emitters that change matter into energy. Maybe.

Throughout all of Star Trek beaming up or down has been a big deal, and has led to many memorable episodes. Beaming can get you out of a tight squeeze, allow you to be transported hundreds of miles, and even split you into two people if you’re not careful. Notably, the concept of teleportation wasn’t invented by Star Trek, but it was certainly popularized by it. However, had Gene Roddenberry had enough money to depict the Enterprise landing on planets every week, the transporter may never have become so important. It was cheaper to beam the crew than to do a special effect of the ship land, meaning the economic limitations of special effects in the ‘60s made “beaming” the thing it is today.

There have been numerous “beaming” effects throughout all of Star Trek, but people almost always say “energize” before or after it happens. Captain Kirk was also famous for saying “two to beam-up” or “beam me up,” though he never, never, never once, said the exact phrase “Beam me, up Scotty.”

Look like no one on Discovery will say it either. That is, unless Scotty guest-stars at some future point.

Star Trek: Discovery debuts on September 24 on CBS, and then airs on CBS All-Access.