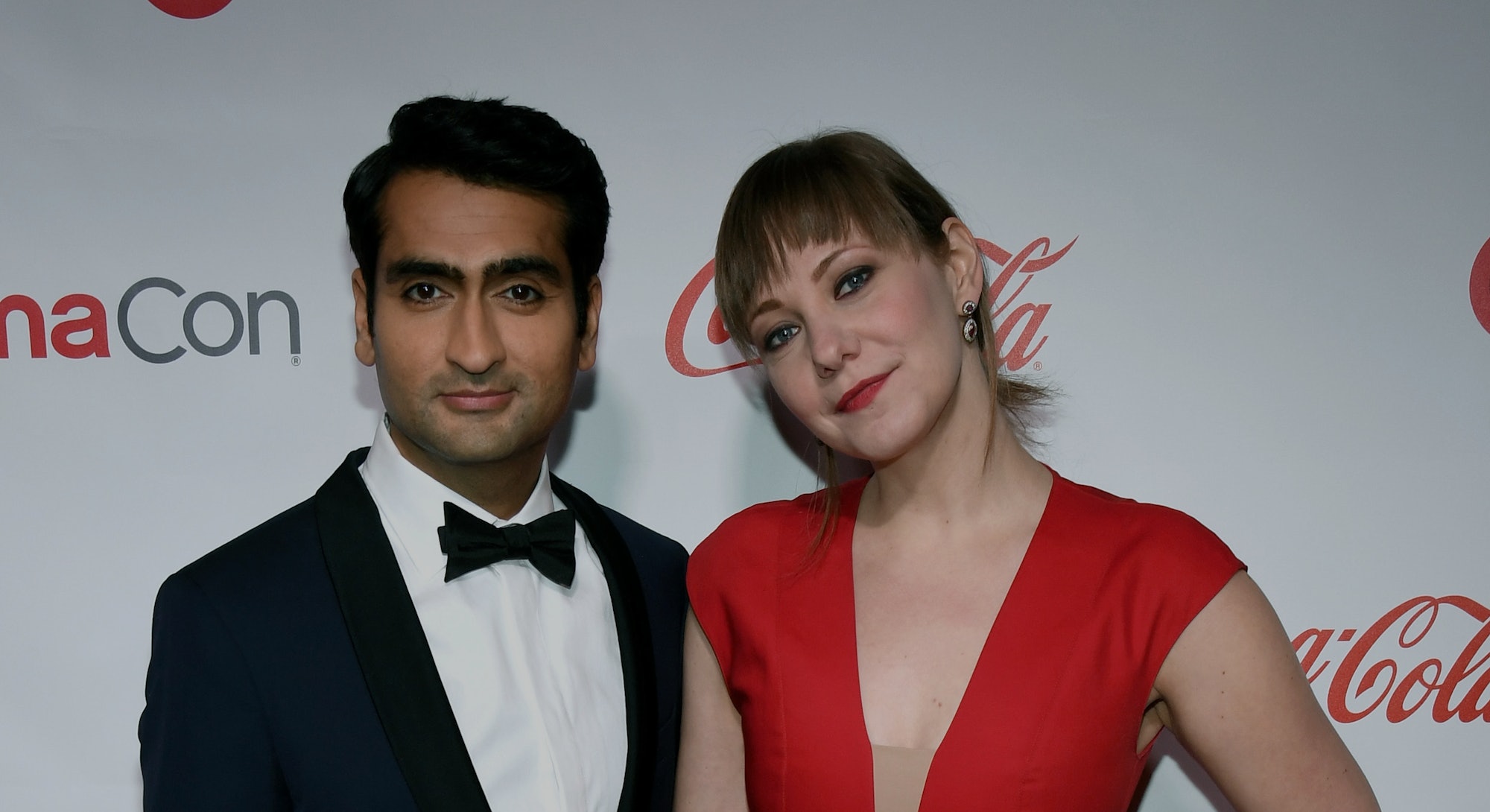 This is how you want to find them, exactly as you’d pictured. The author Emily V. Gordon and comedian Kumail Nanjiani (Silicon Valley) co-wrote the autobiographical romantic comedy The Big Sick, about the unconventional early days of their relationship. The now-married couple is poring over a menu, debating the merits of the Four Seasons’s lunch offerings. When Emily announces that she’ll have the curry pie, Nanjiani acts playfully disappointed. He wanted the curry pie.

Accommodatingly, Emily says she’ll order something else, something healthier, so that Kumail can eat the pie. No, he says. He doesn’t want to do that to her. Why can’t they both just get the pie?

“Well, it’s only tough ‘cause I did not eat healthy last night,” Kumail explains. “And we have to have photos of ourselves taken, so we have to be eating healthy,” Emily adds.

Finally, they decide to split the pie and order a healthy dish to share. It’s a winning compromise, a product of a couple that operates as a team … even when denying that things are always perfect.

Their movie, which was directed by celebrated comedy vet Michael Showalter and produced by Judd Apatow and Barry Mendel, is a lightly fictionalized version of their real story: They have a meet-cute at a comedy club, where Kumail (who plays himself) is performing, and begin a whirlwind romance built on late nights watching movies and driving around in his Uber. It gets rocky, though, when Emily (played by Zoe Kazan) learns that Kumail hasn’t told his parents about her, because they’re Pakistani immigrants and want him to have a traditional arranged marriage. (His mom’s endless parade of suitors for Kumail is a highlight.)

The family dynamic is loving but a bit tense, because Kumail has to hide his disregard for religion, as well as his love for pork and, now, a white woman. Shortly thereafter, the secrecy leads to a break up, and Emily falls ill and slips into a coma. Kumail is the one to take her to the emergency room, and her parents (Holly Hunter and Ray Romano) soon arrive. It makes for an awkward meeting — he had just broken their daughter’s heart — and much of the movie is spent exploring Kumail’s relationship with both sets of parents.

The movie based on their travails was a huge hit at Sundance, where it was purchased by Amazon for $12 million. Nanjiani and Gordon spoke with Inverse earlier this week about the long road to telling their story.

You’ve said that before you could write any other movie, you needed to write this one. Why?

Gordon: I think when people write stories, they want to write things about the things that have changed them. Partially because it’s like you want to get that out of you, partially in hopes that, you know, someone will see it and kind of see themselves in it.

Did you ever think about changing the names of the characters, so it wasn’t so obviously about you guys?

Gordon: We did talk about changing the names. It just was … none of them kind of stuck. I feel like maybe we would talk about it, and it just didn’t kind of stick.

Nanjiani: And that was also from Judd. Judd was like, “People should know that this is your story, that it’s fictionalized.” But, you know, like in Trainwreck, [Amy Schumer’s] name is Amy.

It’s a very personal story; when did you decide you wanted to tell it?

Nanjiani: We hadn’t even talked about writing. Judd just wanted to work with us.

Gordon: He wanted to work with you. He didn’t know me as well.

Nanjiani: You’d met, but you didn’t know him as well. OK, he wanted to work with me. He was like, “Do you have any ideas of stories?” And I mentioned this one. He was like, “Alright. Let’s get to work on that.” We started working on it immediately.

Had you talked about making it before the Judd conversation?

Gordon: I think we needed a certain amount of time to go by that we could access it without it being overwhelming. I’d written a couple of essays about it, and, often, it was difficult. I think we talked about it a little bit. I think if it had not been for Judd going, “Hey, this is definitely the thing you guys need to do,” I don’t know that we would have pursued it on our own. Just ‘cause it was hard.

Nanjiani: I think at some point we would have. I don’t know if we would have gotten it made. Certainly, Judd is the reason it got made. Even just the writing, not just getting the money, which was an obvious way that he helped.

Gordon: Because we would write a draft and be like, “Oh, this is great.” And then Judd and Barry would be like, “Here are all the reasons why it’s not great.” Then, we’d be like, “Oh, I guess you’re right.” And then we’d have to go back and rewrite. But I think if we were just doing it on our own, we would be too focused on the truth and not as much about making it a really good story.

What did you learn about each other during the process?

Gordon: It’s interesting to see how people’s brains work when it comes to processing certain events, or how they think about them. That’s stuff that you have no reason to ever talk to your spouse about. Why would you ever? Unless you’re in a therapy situation, or you’re writing a movie together. One is cheaper than the other. Honestly, therapy is cheaper. It’s basically just a level of empathy. You want to always feel like you can see from another person’s perspective. And one really good way to do that is to read something they’ve written about an experience.

Gordon: I was angry and in a lot of pain.

Nanjiani: I didn’t understand just how awful it was for you because it was so not awful for us.

Gordon: You want to just catch up post-coma, and it’s so much to process, and nobody is giving you time to process because they’re so excited that you’re okay. Which I get. It took me a couple days to catch up to like, “Oh, my God. Oh, everybody’s feeling grateful. I should be feeling grateful, too.” But, for a few days, I was very angry.

Were there things you were afraid to include or depict?

Nanjiani: But, I think it can also be good to write from the super emotional thing, leave it aside, and look at it later and step through it.

Gordon: I think some of the best writers are people who can experience something and process it quickly enough that they can almost immediately distill it. I’m not one of those people.

It’s not just a coma movie. It’s also a love story. Was that intimidating, to write about your early relationship?

Nanjiani: What happens that’s as big as a coma? Even the other difficult stuff feels way easier.

Gordon: You’re like, “Oh, you’re scared to show your heart to someone? Whatever. Who cares.”

How has the movie changed your relationship?

Nanjiani: We had disagreements in the writing; we had disagreements on the shooting. But, I really felt like since right before we started shooting, we really sort of became a team doing this weird, very challenging thing together.

Gordon: We’ve also been through more intense things than this.

Kumail, you also had to address your family here. You’re not revealing anything new, but how did you approach depicting them on-screen, especially knowing they wouldn’t come across as the good guys?

Nanjiani: It’s tough. And you sort of have to relive the time when you’ve really disappointed them a lot. And even though, for me and my parents, we’ve worked through it, it’s still hard in a way. It’s still hard to go through it and think about it. They watched it, but I had to remind them like, “Hey, remember when I did this thing that you didn’t like?” So, it’s strange. It’s very strange sort of to have them deal with it again.

Nanjiani: They really liked it. They are seeing it tonight again. I wanted to show it to them before the premiere. It’s just complicated for them to see parts of their lives on-screen, and they had nothing to do with the creation of it. And writing from their perspective made me understand their perspective more. Just that I saw the stuff that they would say to me. I had to write down what they would say to me, and I understood. Like, “Oh, yeah. That makes sense.”

Gordon: Yeah. When you’re having to come up with dialogue for people that you care about to say to you, it’s a great couples therapy exercise, too. Having to put yourself in another person’s shoes, and what would they say to you if they were trying to convince you. Like, why are they right? Because when you’re writing that character, that character thinks they’re right. Everybody thinks they’re right.

The Big Sick opens in New York and Los Angeles this weekend.