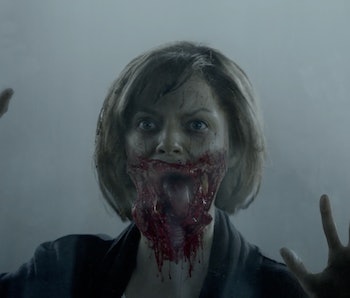 The citizens of Bridgeville, Maine, had a really hard 24 hours in the first episode of Spike’s Stephen King adaptation The Mist. Based on King’s 1980 novella of the same name, The Mist tells the story of a fictional town that’s inundated with a mysterious mist that causes panic and, if the premiere episode is anything to go by, a lot of death. Series creator Christian Torpe is starting things off with a bang and a lot of blood.

Guys, this post contains spoilers for Episode 1 of Spike’s The Mist, so maybe look away if you don’t want to know plot details.

Granted, it’s easy enough to assume that the next few episodes won’t have nearly as much death as the first. The dangers of the mist have to be evident from early on, and, if I were in this show, I wouldn’t be stepping outside that mall anytime soon. And that isolated hiding place is where all King stories get good — when humans are forced to confront their demons and prove how good or bad they are.

First, we start with this very good boy you see above. He’s named Rufus, according to the tag on his collar that the soldier Bryan Hunt discovers.

Rufus is a short-lived character, as he’s taken out by whatever mysterious entity lurks in the mist, torn apart, and hung from a tree. A lot of the deaths in the first episode are obscured by the mist, which makes everything blurry and all the more terrifying. Why does the dog always have to die?

2. Cow Man With No Backstory

The second death of the series belongs to a gentleman who was beating up on a young woman named Mia Lambert (Danica Curcic). He keeps demanding to know where something is and pulls a gun on her right before she guts him with a pitchfork as a gaggle of doe-eyed cows look on.

I mean, the dude kind of seems to deserve it? Pick on someone your own size, pal.

Next up are two mist-shrouded deaths in a row.

As Frances Conroy’s Natalie Raven and her husband Benedict (Derek McGrath) try to find their way home through the mist, they encounter a panicked, sweaty man with a gun who demands to know if they’re real. The mist seems to have some sort of effect on the people who stay out in it too long, implying that it might be chemical or supernatural in nature.

Anway, when Benedict tries to reason with the sweaty man, he gets shot in the head.

“I’m sorry,” the sweaty man says, breathing hard and looking horrified by his own act of violence. He claims he couldn’t have known if Natalie and Benedict were real or not without killing one of them.

The sweaty man from earlier then places the gun below his own chin and pulls the trigger, leaving Natalie to her own devices to rush to the church.

The trailers for The Mist have all hinted at Natalie being a religious zealot of sorts, perhaps taking on some of Mrs. Carmody’s fervor from King’s original novella and the 2007 film. Knowing that Natalie’s trapped at the local church after being forced to watch her husband’s death only seem to support that theory.

Easily the worst character in the first episode is this lady (above) who we won’t deign to name. After getting Eve Copeland (Alyssa Sutherland) fired for teaching safe sex techniques rather than abstinence, she then goes on to slut shame a teenage girl who’d been raped by her crush the night before.

So, despite the potential jump scare of this lady being thrown against the mall windows with her jaw torn off, it’s a weirdly satisfying moment when the last thing she sees before being pulled back into the mist to meet her end is Eve.

Officer Pundik (Kevin O’Grady) is the final victim. He disappears earlier in the episode, abandoned by his sheriff, Connor Heisel (Darren Pettie), only to make his way back to the police station with half his face gone, crawling with bugs. The bugs are a constant presence throughout the episode, representing a sort of silent, creeping fear.

The Mist airs on Thursdays at 10 p.m. Eastern on Spike TV.