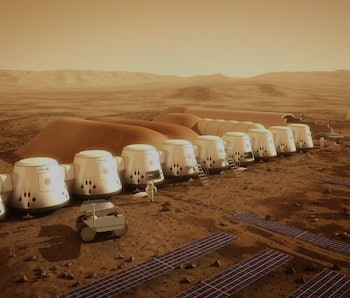 Elon Musk has a lot of ideas about what could to end the world. He thinks A.I. could end the world, as could climate change, and asteroids, too. Yet for all his insistence that the sky will soon fall, Musk is usually willing to fight to keep it from doing so. And Musk recently revealed that he feels that humanity needs a back-up plan to go with all its pro-active efforts at self-preservation through developing clean energy. It’s apparently the project he feels most strongly about, and the one that’s earliest into its life-cycle: getting humanity’s collective ass to Mars.

Musk laid out his plans for Mars in all-new detail in an article published this month in the journal New Space. The details are incredible in their scope and ambition, including building a million-person colony on the Red Planet within a century.

A century is a long time, but it would have to be if Musk is going to run the 10,000 colony trips he thinks will be necessary to build his metropolis, along with the 100,000 cargo trips he believes it will take to keep those colonists alive.

Musk doesn’t beat around the bush when it comes to his motivations for this plan: avoiding human extinction. In the article, he writes that he believes “there are really two fundamental paths… One path is we stay on Earth forever, and then there will be some eventual extinction event. I do not have an immediate doomsday prophecy, but eventually, history suggests, there will be some doomsday event. The alternative is to become a space-bearing civilization and a multi-planetary species, which I hope you would agree is the right way to go.”

Musk is a big thinker, which means that he sits and ponders the physical reality of ideas that other people see only in the abstract. When Musk thinks about the problem of human extinction, it bothers him to the point that he feels he has to take real action to prevent it: “The main reason I am personally accumulating assets is in order to fund this,” he writes. “I really do not have any other motivation for personally accumulating assets except to be able to make the biggest contribution I can to making life multi-planetary.”

Musk has actually been talking about Mars this way for a long time. In 2015, Musk posed for a profile in WaitButWhy on just what he thinks colonization of space can accomplish. His basic message was that we should think of space as a back-up hard drive that can save a copy of humanity in case of a catastrophic failure — like a semi-regular global extinction event.

“Right now we’re all on Earth,” writes blogger Tim Urban when describing Musk’s thinking on space, “which means that if something terrible happens on Earth — caused by nature or by our own technology — we’re done. That’s like having a precious digital photo album saved only on one not-necessarily-reliable hard drive. If you were in that situation, you’d be smart to back the album up on a second hard drive. That’s the idea here. Elon calls it ‘life insurance for the species.’”

Still, Musk does see space as a worthwhile end unto itself, something that will enrich the people back home with new technologies and an inspiring example of what’s possible with decades of hard work and a few tens of billions of dollars of investment.

“The big picture,” Musk told Urban, “isn’t just to back up the hard drive but to really change humanity into a multi-planetary species.”