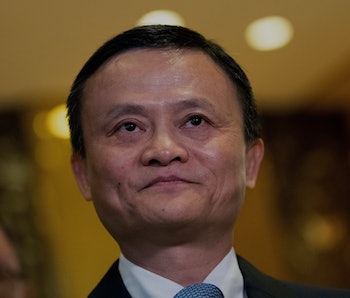 On Wednesday, Jack Ma, founder of Alibaba, the massive Chinese e-commerce company, made quite the prediction: He said that our current technological revolution and the rise of artificial intelligence will cause World War III.

In his interview with CNBC at the Gateway ’17 conference in Detroit, Ma talked about the changes that will happen in the world over the next thirty years. Unlike Elon Musk, Ma isn’t worried that artificial intelligence will rise up and kill us, but that the job loss caused by machine learning and artificial intelligence will be extremely painful for many people. Because of this, World War III may be around the corner, he said. And his argument can be backed up by history.

“The third technology revolution may cause the Third World War,” Ma told CNBC. “The next 30 years are going to be painful.”

A technological revolution is defined as a period where one technology rapidly replaces another technology. From 1870 to 1914, the railroad, the telegraph, electricity, and the telephone exploded into existence and changed the face of the world, in a period called the Second Industrial Revolution. It was a period of increased globalization and spread of ideas, and is considered to end at the start of World War I. Between World War I and World War II came new materials like nylon, plastic, and long range missile technology.

Although Ma thinks machines will be smarter than people, he doesn’t think they will ever be able to defeat humans. The danger to people lies in job loss, he says.

As part of this technology revolution, we are also seeing increased globalization due to the internet, Ma said. While he is a supporter of the increased connection of people around the world, Ma is worried about the pain the technology revolution will cause. “People are already unhappy because machine learning and artificial intelligence has killed a lot of jobs,” he said. His plan is to get small local businesses to become global in the hope that it helps them survive.

The Alibaba Group was founded by Ma in 1999 and is sort of China’s everything store; it operates in all segments of consumer-business sales. It operates in more than 200 countries.

More like this
Science
6.25.2022 4:00 PM
Voyager: 12 spectacular images from NASA's longest-lasting mission
By Jennifer Walter
Innovation
6.27.2022 8:00 PM
Artificial photosynthesis can grow plants without light — and may solve a planetary dilemma
By Steph Lee
Innovation
6.21.2022 11:00 AM
No, Google’s Deepmind isn’t on the verge of human-like reasoning
By Tristan Greene and Undark
Related Tags
Share: