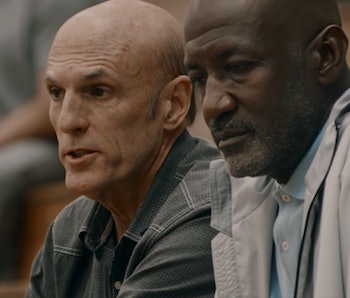 In its latest commercial, IBM really wants you to know that it’s doing sports analysis, even if Watson can’t yet tell the difference between a pull-up jumper and a three-pointer.

In the commercial, two scouts are focused on a particular player, and they pepper their scouting with basketball jargon which leads up to the final joke. They compare complicated stats like on/off splits, offensive win shares, and then comment on the player’s great stop-and-pop.

Watson is getting into sports analytics, but the commercial shows that it hasn’t quite gotten the details down-pat. And the entire premise which ran during the NBA Finals sets up a weird scenario: IBM is selling its sports analytic technology to teams and companies to improve athletic performance, but its commercials target the general American public. The sports analysis that Watson is doing ultimately focuses on the fact that its artificial intelligence systems are great at numbers but not the lingo, which is likely supposed to be comforting that AI isn’t going to replace human scouts just yet.

Dissatisfied with each other’s analysis, they turn to ask Watson what it thinks. The computer replies, “My trade off analytics indicate that no one creates more space on offense. This allows him to nail a jumper from a densely populated urban area.” The two scouts laugh and correct Watson to say “way downtown.”

This is kind of weird on its own because “way downtown” refers to at least at least three-point range and not the pull-up jump shots (aka stop-and-pops) that our fictional player is great at hitting. Now, we don’t totally see the particular shot that the player makes to get Watson to say this, so it’s possible that our player really is great at hitting those threes. But it looks like a long two, and definitely not the long three-point shot that deserves to be called “way downtown.”

In the long run, the fact that Watson might be able to run the analytics but doesn’t have a people sense suggests that basketball scouts aren’t in danger of being completely replaced by Watson’s technology.