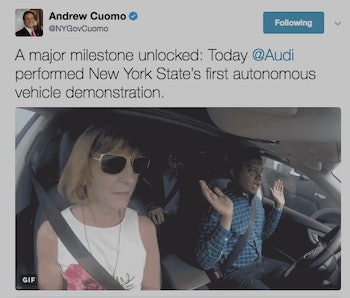 Audi tested an autonomous car for the first time in New York State near the capital, Albany, throughout the day on Tuesday. But Cuomo’s Twitter followers were far more concerned with the absolutely rubbish state of the NYC subway system, which thanks to New York’s confusing jurisdictions is technically the governor’s problem, not the mayor’s. Twitter was quick to point out that while autonomous cars will undoubtedly be part of the next generation of transportation, effective mass transit is the biggest priority for affecting the greatest amount of people’s lives.

This points to a greater issue with autonomous cars: they may be hugely useful, but they still only carry a handful of people at a time. Autonomous technology can and will of course be applied to buses (and trains), but at the moment, most companies are focusing on geo-fenced vehicles that will be part of ride-sharing programs. Those will certainly help with urban transportation, but won’t be even close to a proper subway system in terms of efficiency.

Twitter users also pointed to the fact that a luxury car brand testing an expensive “Highway Pilot” feature isn’t exactly an innovation in transportation that a lot of people are going to benefit from.

A lot of the ire stems from Cuomo’s generally-DGAF approach to the Metropolitan Transit Authority, the greater government organization that runs the subway, buses and peripheral transit lines around the greater New York City metropolitan area. Cuomo has announced some grand plans to modernize the subway system, but as yet, the system is still a complete mess, with an archaic signaling system and janky cars that are much older than most of their passengers. Cuomo’s priorities thus far have been, well, pretty skewed. As NYMag notes, he used MTA money that could have gone to the subway to install toll booths and LED light shows for some strange, stupid reason). Most predictions think it would take up to $20 billion and 50 years to fully modernize the subway, and in the meantime, trains occasionally get stuck with no air conditioning and turn into apocalyptic hell-caves. It really, really sucks, and it doesn’t look like it’s going to get better any time soon. But hey, maybe if we all ride it to work for the next 30 years, we can afford an autonomous Audi!

More like this
Innovation
6.24.2022 5:00 AM
Beam-steering radio technology could help autonomous cars finally hit the road
By Sascha Brodsky
Innovation
6.21.2022 11:00 AM
No, Google’s Deepmind isn’t on the verge of human-like reasoning
By Tristan Greene and Undark
Innovation
6.17.2022 10:00 AM
How one company’s controversial cloning technique is changing Star Wars forever
By Ryan Britt
Related Tags
Share: