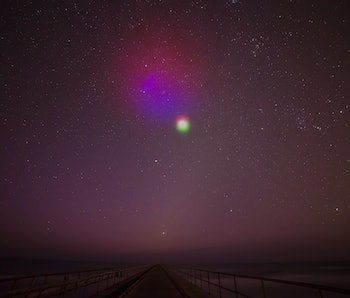 Stubborn clouds continue to derail NASA’s attempts to infuse mid-Atlantic skies with green and red clouds. Originally scheduled for last week, then again for Monday night, the agency announced that the next launch window will come Tuesday, June 13, between 9:04 and 9:19 p.m.

Should the clouds behave, the vapors may be visible from New York to North Carolina, and as far west as Charlottesville, Virginia.

Clear skies are imperative for this mission, which is testing NASA’s multi-canister ampoule ejection system — a small 16-inch diameter portion of a rocket with a bunch of little doors that release soda can-sized, vapor-filled capsules into the sky. If the skies are clear, NASA will launch its new cloud-making tech on the reliable Terrier-Improved Malemute research rocket from the Wallops Flight Facility in Virginia. Wallops is located on a mosquito-infested island, where the space agency commonly launches its research rockets, which make giant U-shaped trajectories into the sky, at times releasing scientific equipment into the atmosphere, and at other times releasing vapors.

For any suspicious, conspiracy-minded folks, NASA — tasked by Congress with studying our atmosphere — has been releasing low quantities of harmless vapors into the upper atmosphere since the 1950s. The vapors are sometimes colorful, allowing NASA scientists to watch these vivid clouds move and disperse, which is how they learn about the behavior of Earth’s ionosphere — over 100 miles up in the sky.

These psychedelic rocket missions are absolutely necessary for studying the high atmosophere, because satellites are positioned too high in Earth’s orbit to study the happenings in our near-space skies.