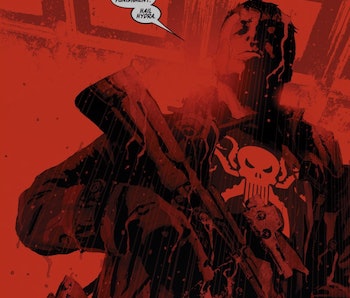 Secret Empire, Marvel’s summer event series starring an evil, Hydra-aligned Captain America, who is, for all intents and purposes, a Nazi, is still trucking along. The third issue, which hit shelves on Wednesday, revealed that another major Marvel character has also joined Hydra — only he didn’t have the excuse of a universe-altering cosmic cube. No, this “hero” signed up on his own free will. Which, honestly, kinda checks out.

Spoilers for Secret Empire #3 are below, but the issue costs $3.99, so read ahead if you want to.

The third issue of the much-maligned series doesn’t explain what the deal was with the second, seemingly “good” version of Steve Rogers, who showed up at the end of #2, but there were other developments. Black Widow tracked down the Spider-Man villain Boomerang, a minor foe who made it to the big leagues when most of the other power players got trapped in Hydra’s dark bubble over Manhattan. Boomerang got his hands on Captain America’s social schedule, and Black Widow wants it so that she can assassinate the Hydra leader. He gives it over, which ends up being a fatal mistake.

At the end of the issue, a bomb goes off in Boomerang’s room, maiming him. His assailant stands over him and gives the following speech:

It don’t matter who I am, Fred. It matters what I could be, if you and I don’t come to an understanding. I could be god’s red right hand. I could be his swift and terrible vengeance. I could be your punishment. Hail Hydra.

Yeah, it’s the Punisher, and he’s added tentacles to his skull logo to make it resemble Hydra’s octopus emblem.

Frankly, this makes a certain amount of sense, since the Punisher is an anti-hero himself. He’s a crazy killer who idolizes fellow vet Steve Rogers. He could get down with fascism no sweat. What’s more concerning is that, as seen in the first issue, Scarlet Witch is also aligned with Hydra. While there’s some evidence to suggest that she’s being mind controlled, it’s still not super cool to see a half-Jewish character of Romani heritage teaming up with Hydra, since they were complicit in the Holocaust.

There are still seven more issues of Secret Empire to go.