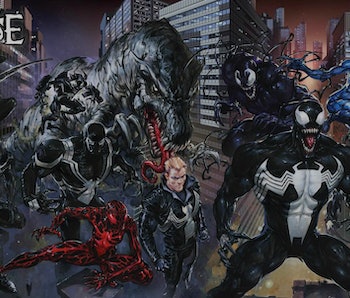 Eddie Brock is returning to the front-and-center of the Marvel Universe alongside (or inside) the alien symbiote Venom thanks to Marvel’s upcoming summer event Venomverse. Eddie will lead an army of symbiote-suited superheroes, including unexpected fan favorites such as Old Man Logan, Mary Jane Watson, and Black Panther.

Lewis and writer Cullen Bunn are taking the antihero and his gang to a place that might feel familiar to Marvel fans. In 2014, writer Dan Slott pulled a similar stunt with the Spider-Verse, which rounded up Marvel’s various versions of Spider-Man throughout the years and went about gleefully killing off every Spidey, from Civil War’s Iron Spider to Earth-15901’s Vampire Spider-Man and Earth-8101’s Spider-Monkey.

“If Spider-Verse was Saving Private Ryan,” Lewis said, “then Venomverse is Die Hard,” whatever that means.

Featured art from Venomverse includes first looks at Poison Hulk, and glimpses of Venomized Black Panther, Logan’s Wolverine, and Gwenpool, all of which can be found on Nerdist’s website.

The question that remains is this: If Eddie is John McClane, then who’s playing Hans Gruber?

More like this
Entertainment
6.30.2022 3:14 PM
Who is Red Dagger? Meet Ms. Marvel's first real sidekick (and first kiss)
By Eric Francisco
Entertainment
7.4.2022 11:30 AM
10 years ago, the most misguided Spider-Man movie almost killed the franchise (again)
By Felipe Rodriguez Torres
Entertainment
22 hours ago
Like Guns N Roses, Thor: Love and Thunder asks: Where do we go now?
By Eric Francisco
Related Tags
Share: