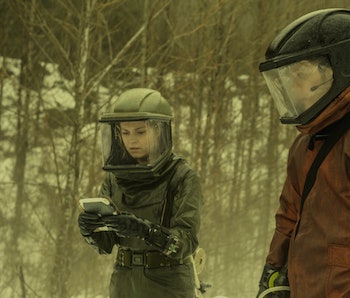 Post-apocalyptic drama The 100 constantly features surprising turns and unexpected revelations — but the Season 4 finale, “Praimfaya,” featured the most WTF moment yet.

Spoilers for The 100 Season 4 finale are below.

“Praimfaya” follows Clarke, Bellamy, Raven, Murphy, Monty, Harper, Emori, and Echo as they prepare to return to the Ark for five years. The Death Wave — which is the term they gave the nuclear meltdown they’ve spent all season anticipating — renders Earth unlivable for half a decade. Space is their last-minute survival plan, if only they can prepare Becca’s scrappy little spaceship in time.

Fortunately, after scrambling by the seat of their pants, most of their group makes it up to the Ark. Unfortunately, Clarke does not.

Although the rest of the group thinks she’s dead, the viewer is shown that she survives this scorched Earth, thanks to her nightblood. (Recall that she made herself a nightblood earlier in Season 4, when she and Abby were experimenting with alternate survival plans).

Clarke is alive — but the end of “Praimfaya” leaves everyone else’s fates as a giant question mark.

The episode’s final shot in the current timeline is Bellamy and Raven surveying Earth from a window in the Ark, just like Abby, Jaha, and Marcus used to do in Season 1. Raven is skeptical that they can go on without Clarke, but Bellamy says, “If we don’t, she died in vain. And I’m not gonna let that happen. With me?” Raven responds, “together,” which has been Bellamy’s catchphrase with Clarke for the past four seasons. They resolve to honor Clarke by persevering. The 100 then jumps six years and seven days into the future.

That’s where things get confusing.

The scene opens on Clarke, who has shorter hair with purplish dyed streaks that recall her Season 3 wilderness days. Apparently, purple is her official Wilderness Hair — but this time it’s shorter to show that she’s a mature mid-twenties adult now. She sits on the ground by a rover, looking out over a deserted land as she talks into a radio addressing Bellamy.

As she explains, she’s unsure if he can hear her, but she’s been “talking” to him daily in order to stay sane and maintain a grip on her identity. If Clarke is cast away, the radio to Bellamy is her Wilson.

“If you can hear me; if you’re alive, it’s been safe for you to come down for over a year now. Why haven’t you?” she says into the radio.

Even more mysteriously, she explains that Octavia, Abby, Marcus, Miller, and everyone else in the bunker have also not emerged in the year since Earth has been safe again. “We tried digging them out, but there’s too much rubble,” Clarke says.

Why would the crew in the bunker stay underground for an entire extra year? Even a show with a death toll like The 100 wouldn’t kill so many important characters off-screen. More likely, Octavia’s unification plans didn’t work out, and she’s been usurped by a less altruistic ruler who isn’t letting them out for unknown sinister reasons.

But let’s return to Clarke’s phrasing. Who is “we?”

The next scene reveals that Clarke has a companion, a young nightblood teen named Madi, who she’s apparently mentoring since “lessons” are mentioned. It’s unclear whether Clarke and Madi are alone together or if there is more to “we.” They seem to be living in the rover.

Madi looks like she’s around thirteen or fourteen, meaning, she’s too old to be a daughter Clarke had during the six-year time jump. It isn’t explained how the two connected. Clarke then cuts her radio off when she sees a ship descending from above. “Never mind, I see you,” she says joyfully, assuming Bellamy has returned at last.

Not so fast. The ship is much bigger than Becca’s scrappy little ship they traveled to space in six years ago, and the side of it ominously says “prisoner transport” and “Eligius.” This implies that it comes from a civilization large enough to have a justice system — which does not apply to the small group of Bellamy, Raven, Murphy, Emori, Monty, Harper, and Echo.

Earlier in Season 4, Jackson and Abby had a blink-and-you-miss-it conversation about Becca originally making nightblood for Eligius Mining Company. “Long duration space missions. Criminals were put into hypersleep and given nightblood to protect against solar radiation,” Jackson explained.

One fan on Reddit pointed out another reference to Eligius earlier in Season 4, in the form of an article about a lost “asteroid mining penal colony.”

Eligius is apparently now transporting prisoners to Earth, perhaps to see if it’s habitable, just as the Ark did to the delinquents in Season 1. That would set Season 5 up to be a fun-house mirror version of prior seasons: Clarke is the grounder, Octavia, Indra, Abby, and Marcus are the Mountain Men, and the Sky People are unknown criminals. Creator Jason Rothenberg has said they will be a threat in Season 5.

But the question remains about whether Eligius hooked up with Bellamy, Raven, and their friends in a peaceful way or whether they’re among the prisoners. There’s also a question about who owns Eligius and how it avoided detection from most Arkers for so many years. Season 1 led both the viewer and the delinquents to conclude that they weren’t alone on Earth. The implication that Bellamy, Raven, Murphy, and their crew weren’t alone in space is far creepier and more tantalizing.

The 100 has been renewed for a fifth season at The CW, but an official premiere date has not yet been announced.