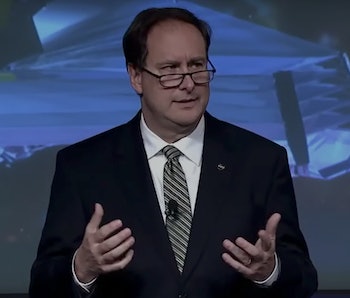 5. DSCOVR Earth-viewing instruments: The Deep Space Climate Observatory program will be shut down.

“There’s still 18 good space missions going and several airborne missions going to support the science side of the house, so I’m excited about that,” said Lightfoot, who’s been at the agency since 1989 but became acting director after its previous chief, Charles Bolden, resigned on inauguration day.

The cuts to science missions were expected, as was the elimination of NASA’s office of education, but Lightfoot attempted to put a positive spin on the news that’ll be hard to take for many at the agency.

“[The budget] also no longer supports a formal office of education, but I think we’ll continue to inspire that next generation; it’s what we do,” Lightfoot said from the podium at NASA Headquarters in Washington, D.C. He continued, “Let me tell you, we’re committed as we always have been to inspiring that next generation with what we do.”

Lightfoot said that NASA will now look for new ways to engage with the public absent a formal office to do that.

“And we’re going to engage the public in the compelling stories of what we’re trying to do in the missions we’re trying to create and making those things that are impossible, possible,” he said, adding later, “we’re actually gonna take a good, hard look; use this opportunity for NASA to revisit how we do public outreach and public engagement.”

Lightfoot brought up the president on two separate occasions:

“Over the last couple months we’ve had the president really recognize the work we’re doing,” he said. “It was pretty amazing to be there [when Trump did an uplink to the ISS]. That was pretty neat.” This was the same event where Trump made his “Mars 2024” comment.

Later, the NASA director recalled Trump’s speech when he championed American exploration of space. “The president said, ‘American footprints on distant worlds are not too big of a dream.’ And we’re executing programs step-by-step to make this dream a reality,” Lightfoot said.

Lightfoot’s official remarks (not the speech) offered this projection for exploration:

“Working with commercial partners, NASA will fly astronauts from American soil on the first new crew transportation systems in a generation in the next couple of years. We are continuing the development of solar electric propulsion for use on future human and robotic missions. NASA is fabricating and assembling the systems to launch humans into lunar orbit by 2023. Our budget request supports progress toward these and many other major milestones as part of the diverse portfolio of work we execute as we explore, discover, and develop on behalf of the American people.

The president’s vision for NASA is to turn up the exploration, and turn down the planetary, climate-studying science. NASA estimates the budget 2018 budget to be $19.1 billion, less than the $19.6 billion in 2017, and the $19.2 billion in 2016. Dig into the budget for yourself at nasa.gov/budget.

More like this
Innovation
5.6.2022 12:00 PM
NASA wet dress rehearsal woes set back launch date of Moon mega-rocket
By Doris Elín Urrutia
Innovation
4 hours ago
China and Russia are on track to set up a Moon base by 2036 — here’s the plan
By Allie Hutchison
Science
5.13.2022 6:00 PM
Once a year, we get closer to NASA's Voyagers — here's why
By Elizabeth Howell
Related Tags
Share: