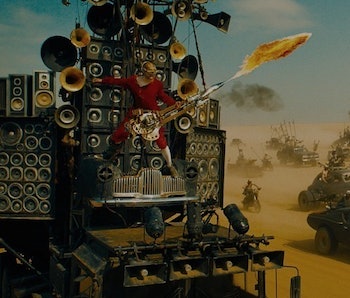 One of the most talked-about flourishes in director George Miller’s new movie Mad Max: Fury Road from this past weekend (other than how ridiculously good it is) was the Doof Warrior. Who exactly is the Doof Warrior, you ask? He’s the deformed guy in the red pajamas leading the movie’s main baddie, Immortan Joe, and his war party by shredding a flame-throwing guitar in front of a huge deck of amplifiers mounted to a cobbled-together hot rod.

Yes, this movie is irretrievably bonkers in the best possible way.

For their seeming impossibility, the Doof Warrior and his ax weren't some CGI creation. Like many of the redonkulous effects in the fourth installment of Miller's post-apocalytic saga of Max Rockatansky, they IRL'ed that sucker.

Production designer Colin Gibson explained to MTV how he pulled it off. "So the plan basically was to try to come up with a vehicle, an idea that could be heard over the roar of a couple of hundred amps," he said. "And the only way to do that was to build the largest, last Marshall stack at the end of the universe."

The guitar rig they built, which was played by a singer and cabaret performer named iOTA, had to be up to Miller's non-CGI standards. "George — unfortunately — doesn’t like things that don’t work," Gibson explained. "I have in the past built him props that I thought were just supposed to be props, and then he goes, 'Okay, plug it in now.'"

In the film, Doof's role is essentially as the frontman of a battle-anthem orchestra, backed by a pack of mobile drummers. No self-respecting army charges without music. Doof can be heard literally miles away (his tunes waft across the desert well ahead of the armada) inspiring his fellow marauders and announcing their presence with a ghoulish bravado. "It was a bit like a Kiss concert: there needed to be flames," Gibson said. "There needed to be fun. And unfortunately, there weren’t too many places on the vehicle to have it done — and nearly all the other vehicles had flame throwers or machine guns."

Gibson later said that Doof's red costume was a trick to pull the audience's eye to him in the middle of all the action, and that Miller created an elaborate backstory for the character that involved his being spared a worse fate because of his shredding ability. The music never dies, apparently, even when it's out to kill you.

More like this
Gaming
Sep. 26, 2022
How to unlock the wild Trombone Champ secret ending
By Joseph Yaden
Gaming
Sep. 22, 2022
You need to play the funniest music game ever made ASAP
By Joseph Yaden
Entertainment
19 hours ago
Iron Fist star remembers “turbulence” in his time in the MCU
By Eric Francisco
Share: