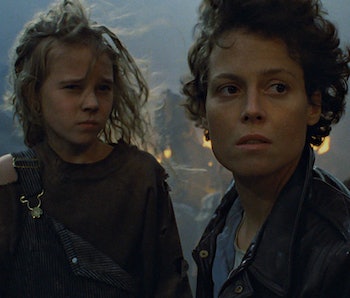 As the colony ship Covenant races into the stars and into theaters on May 19, the future of the entire Alien franchise rides with it. Like the eponymous creatures that populate the franchise, the Alien film series is a rugged and adaptable survivor. Beginning life as an arthouse horror flick reimagined as an ‘80s blockbuster, and even finding life as monster-on-monster shlock action, these aliens have slithered and crawled through various incarnations, with varying degrees of quality. Still, like the extraterrestrial biodiversity that pervades the films, some fans probably prefer one incarnation of the series over another.

Director Ridley Scott is poised to make an as-yet-unknown number of sequels following Alien: Covenant’s release. But, for now, how do all the films in the Alien series — even the non-canon ones — stack up in a ranking? From AvP to Prometheus, here’s a totally unofficial, completely subjective ranking of all the Alien movies, from worst to best.

Mild spoilers for all the Alien movies, but not Covenant, ahead.

8. Alien vs. Predator: Requiem (2007, Directed by The Brothers Strause)

You knew this one would come in last. There might be some amazing fight sequences in this flick, but there’s no way to know because the budget of the film seemed to disclude a lighting director. Though the theatrical release of this movie created abysmal reviews and even poorer box office sales, it apparently does great on the rental and DVD market, which makes sense. The quality is like a direct-to-video movie from the ‘90s.

Completely invalidating the character arcs of Ripley, and Bishop, this installment made the franchise darker than it needed to be. It was also almost totally nonsensical. The scene in the shower in which Ripley is terrified of the xenomorph is literally the only good part. If you’ve seen the trailer, you don’t need to see the movie. In fairness, this movie feels more like a real Alien movie than perhaps Prometheus does; it’s just that it’s not fun to watch.

Surprisingly, the first Alien vs. Predator cash grab actually has a little bit of soul. The cast is pretty good, especially Lance Henriksen’s turn as an early Weyland Corp. executive and roboticist, Charles Bishop Weyland. Though Prometheus and Covenant completely contradict the continuity of this movie, there are surprising similarities between this film and Prometheus insofar as both try to connect the xenomorph mythology with ancient human history. In 2007, Aliens director James Cameron even said the movie was “pretty good.”

The newest Alien film is certainly not the worst in the franchise, but it’s not the best either. Just as biological mashups are the central subjects of story, the film itself feels like a mashup of different sensibilities. On the one hand, it’s a direct, and not-so-satisfying sequel to Prometheus. On the other hand, it feels like Ridley Scott is trying to appease both producers and fans by making some parts of the movie look more like the original film. And the scariest bits aren’t the aliens this time, but instead, David’s misunderstanding of Percy Shelley’s poetry.

Confusing, bizarrely ponderous, and downright frustrating in the year of its release, Prometheus is nonetheless unique. It’s part of the Alien mythos, but oddly, was asking entirely different questions. The cast is also fantastic. If this film had been the only prequel to the series, and more directly answered the confusing xenomoprh origin mysteries, it would probably rank a little higher on the list. Despite its flaws, Prometheus feels like a complete film, and nearly exactly what its director intended. This movie took some weird chances. Not everyone appreciated that direction, but artistically, it’s far less commercial than most franchise sci-fi films.

A completely underrated movie, unfairly derided upon its release. With a script by Joss Whedon and beautiful direction by Jean-Pierre Jeunet (Amelie), Resurrection literally breathed new life into the basic concepts of the Alien universe. There’s secret robots, new xenomorphs, and Sigourney Weaver as a clone of herself. Not the most intelligent film in the series, Resurrection is undeniably fun and utterly complete. Plus, Sigourney’s no-look basketball swoosh is worth the price of admission.

A nearly perfect sequel, Aliens doesn’t try to remake everything that was good about the first movie but instead widens the scope. Of all the brilliant aspects of this film, the most overlooked decision was the sneaky suspended-animation trick. Ripley is able to wake up in the future, and everything is suddenly different. The late Bill Paxton still owns this movie though: Game over, man. Game over.

The genesis of Alien as a film is nearly as confusing as the unfolding mythology surrounding the xenomorphs themselves. Influenced by horror films like The Terror From Beyond Space(1985), the trope of a lone extraterrestrial monster hunting humans on a spaceship was hardly new in 1979. What was new, however, was the almost naturalistic approach to the film. Writing in Outer Limits: The Filmgoer’s Guide to the Greatest Science Fiction Films, critic Howard Hughes cites the realism of the Nostromo crew as a key element to the movie’s success: “The crew’s conversations, featuring overlapping dialogue, mumbling and banter in the manner of a Robert Altman film, adds to their interactions, spontaneity and veracity.” The influence of this aesthetic has impacted filmed science fiction for decades, with several contemporary creators continuing to reference Alien as an inspiration. In space, no one can hear you scream, but the applause, 38 years later, is still deafening.

Alien: Covenant is out in wide release on May 19.