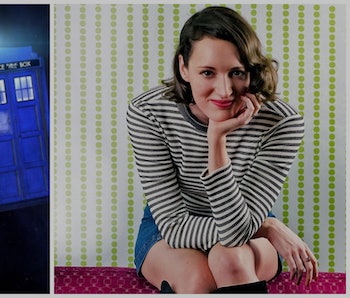 After flying with Han Solo on the Millennium Falcon, fans of Doctor Who would love for Phoebe Waller-Bridge to take over the controls of the TARDIS. But, if the Time Lord doesn’t regenerate into the Fleabag actress, Waller-Bridge has an idea for what kind of character she could be on Doctor Who.

In a video interview with TV Guide, Waller-Bridge says she’d love to play a “snake alien” on Doctor Who. Though she didn’t outright deny the idea that she was being considered for the role, she seemed to dismiss it by saying it was “so cool to have my name in that mix.” She also suggested that she believed rumors that the role would specifically not go to a woman were false. “There are so many rumors flying around. I think it’s a great time for [a female Doctor Who lead], and there are so many great actresses.”

Waller-Bridge’s willingness to play an alien might suggest that rumors of her playing a CGI alien or droid in the Han Solo movie are totally true.

See also: Doctor Who Shoes Tell the Entire Story of the Modern Doctors