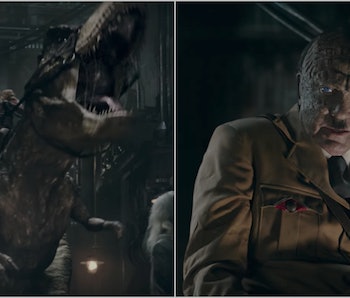 Look, let’s just cut to the chase: Adolf Hitler rides a Tyrannosaurus rex in the trailer for an upcoming movie called Iron Sky: The Coming Race. It’s 2017, and I am so sick of writing about [Nazis]((https://www.inverse.com/article/31243-hydra-cap-captain-america-nazi-secret-empire-thors-hammer-mjlnir-worthy-norse-mythology) in pop culture.

According to Bloody Disgusting, the film is a sequel to the 2012 comedy sci-fi movie Iron Sky. In that illustrious motion picture, the Nazis fled Earth for their secret moon base when they realized they were losing World War II and came back to conquer it in 2018 with a fleet of spaceships. Sure.

The sequel, which has horrifically prescient timing, takes place 20 years after the original movie. Earth has been destroyed, and the survivors are all living in the (formerly) Nazi moon base. Okay.

Here’s what happens next, according to the official synopsis:

Twenty years after the events of Iron Sky, the former Nazi Moonbase has become the last refuge of mankind. Earth was devastated by a nuclear war but buried deep under the wasteland lies a power that could save the last of humanity – or destroy it once and for all. The truth behind the creation of mankind will be revealed when an old enemy leads our heroes on an adventure into the Hollow Earth. To save humanity they must fight the Vril, an ancient shapeshifting reptilian race, and their army of dinosaurs.

And, yeah, Hitler is fighting with the evil aliens. He rides a T. rex. What else can you say at this point? Other than the Greatest Generation would be proud.

And here’s the trailer.

Iron Sky: The Coming Race will play in select theaters on Valentine’s Day, February 14, next year. So, assuming we all live to 2018, you can watch it then.