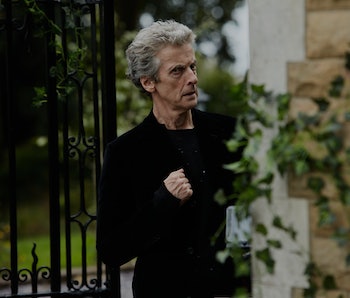 Because the Doctor (Peter Capaldi) is a 2,000-year-old time-traveling alien, he frequently misses what the cool kids are into these days. And though the latest Doctor Who episode bills itself as a jumpy haunted house creeper, it comes across like the show is making fun of itself for being so old fashioned. Haunted houses might be scary, but Doctor Who seems terrified of millennials.

Spoilers ahead for Doctor Who Season 10, Episode 4: “Knock Knock”

For most young people, finding an affordable place to live can feel like monstrous torture and the latest episode of Doctor Who takes that premise literally. When Bill (Pearl Mackie) and five college-aged friends are in search of a place to live, every option is out of their price range, except a creepy haunted house. Because they’re poor, the diverse gaggle of millennials decides to move into a live-action Scooby-Doo situation, complete with a creepy old man — the Landlord (David Suchet) — and a forbidden tower. While this choice may seem a little unrealistic, as Bill points out, it’s not “an old house and a dodgy landlord, which is pretty standard for students.”

Conveniently, everything about “Knock, Knock,” denies Bill and her young friends everything from contemporary culture. The house they live in doesn’t have cell phone service, a skipping record player creates a creepy effect, and Bill even mentions Indiana Jones in the hope of finding a secret passageway. Meanwhile, the Doctor comes across like a doting and eccentric grandfather trying to make sure his faux-granddaughter is out of harm’s way. He mistakes a song mix on Bill’s phone for the name of a musical artist and generally amuses everyone with his kooky old guy routine. When Bill tries to pretend the Doctor is her “granddad,” the Doctor goofily claims he “doesn’t look old enough.” The viewer, of course, knows he does. “I forget you see,” the Doctor says, “Your human lifespan is not long.” Though Doctor Who was hip and in touch with a younger generation in the recent Tennant and Smith years, arguably, that’s not the case anymore. And in this episode, the Doctor finally knows it

If “Knock, Knock” had been a David Tennant or Matt Smith episode, it wouldn’t have worked, mostly because those versions of the Doctor wouldn’t have been able to play with the bittersweet humor and horror of the premise. When it is revealed that the old landlord has been keeping his ancient “daughter” alive for over 70 years, the method of this immorality is telling. Every 20 years or so, young people’s souls are devoured and made part of the lifeforce the ancient house. As a show, Doctor Who might feel the same; part of a near-immortal pop-culture tradition, but occasionally left behind by contemporary culture, even as it tries to renew itself every once and awhile.

In the end, the villainous old landlord turns out to actually have been a child, not a father, a meta-fictional commentary on what Doctor Who has been exploring for over 50 years. The kids are in charge of the future, but a crazy old man might still occasionally hang around and rant about the good old days.

Doctor Who airs on BBC and BBC America on Saturdays at 9 p.m. Eastern.

See also: All the Doctor Who Easter Eggs in the Season 10 Premiere