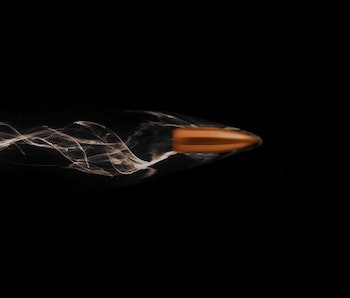 St. Louis Cardinals games are already a pretty horrible experience, but this week, things went to a pretty terrifying level. A woman in the stands at the Cardinals-Brewers Tuesday was hit with a stray bullet shot from a location police believe was probably a mile away.

Thankfully, the woman wasn’t seriously hurt, but the bullet possessed all the lethal potential to kill someone.

“We thought she was joking, but everybody turned around and she showed me the blood coming down from her elbow,” Todd Porter, a fan sitting in front of the woman, told the St. Louis Post-Dispatch. “It looked real purple and red and it looked like there was a hole in her jacket.”

Guns are fired into the air all the time, often in celebration, but that doesn’t mean they suddenly become harmless. What goes up must come down, and a bullet that’s making its way back to the ground can still kill.

The average speed of a bullet is about 1,700 mph. The speed of sound itself is about 767 mph — so bullets have a whopping 1,000 mph advantage over any sort of noise. Though the mass of the bullet is a little over four grams, that speed gives the bullet a very powerful punch.

If a bullet is fired straight up, it will slow down as it moves farther into the air. Earth’s atmosphere and gravity mean a bullet will slow down and reach a maximum height of sorts — around 10,000 feet, give or take.

On its return, the bullet does not carry the ejecting force of the gun anymore. The bullet won’t be zooming back to Earth as fast — in fact it will reach a terminal velocity, as all objects in freefall do. A bullet on its return to the Earth will only come back at about 150 mph, with just one percent of the original energy it possessed when fired.

For an object to break the skin, it needs to be traveling at about 136 mph. This varies depending on the type of bullet and someone’s own physiology, and there are plenty of instances in which bullets traveling double that speed could still bounce off of you for various reasons. But any bullet fired straight into the air has the potential to harm or kill you.

Still, most bullets aren’t fired straight up. Most, when shot in the air, are fired at an angle — and this allows a bullet to retain a greater speed on its way back down to the ground. A lateral velocity on the way up means that you’re going to get a lateral velocity on the way down. The bullet won’t experience a terminal freefall speed — it will be capable of traveling around several hundred miles per hour.

That’s probably how fast the bullet that hit the woman in St. Louis was traveling. Although the lethal potential for a bullet going up and coming down is diminished, it’s not eliminated.

Sucks to think the only falling objects you should have to be on the look out for at a baseball game aren’t simply foul balls or home runs.