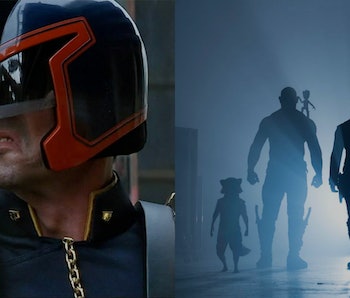 Sylvester Stallone is one of the many big names attached to Marvel’s Guardians of the Galaxy Vol. 2, and despite Star-Lord’s Guardians having already saved the galaxy once before, they’re definitely not galaxy’s first Guardians. That title belongs to Stallone’s Stakar Ogord, better known in Marvel’s comics as Starhawk, and his merry band of weirdos.

The original Guardians of the Galaxy first appeared in 1969’s Marvel Super-Heroes #18 as a team led by Starhawk. Several of these team members — former Reaver associates of Yondu who ousted him from the fold — appear throughout Vol. 2 and finally team up in one of the film’s five post-credit scenes. The team in the film consists of Stakar, Yondu (Michael Rooker), Martinex (Michael Rosenbaum), Charlie-27 (Ving Rhames), Stakar’s adopted sister Aleta Ogord (Michelle Yeoh), and Mainframe (voiced by Miley Cyrus) — the only team member missing from the comics is Krugar.

The OG team fiddles around throughout the film, popping up intermittently around one other and coming together in a super spoiler-ridden, pivotal scene that’s too much to write about here. But one of the post-credit scenes (which has no impact on the plot of the film and therefore isn’t really a spoiler) is where they really get together.

If you get the feeling that there’s something bigger in the works when Stakar says, “Let’s steal some shit” with a grin, you’re right about that. The MCU doesn’t do much without reason.

Guardians and Vol. 2 director James Gunn has hinted before that he’d like to continue something with the original team in the future.

“You will not see them again until Guardians 3 at the earliest,” Marvel Studios president Kevin Feige told io9. “One of James’s ideas was fleshing out the character of Yondu … and having the fun of tipping our hat to the original Guardians team from the comics. Which is all that is. Which, again, just gives James another set of tools to play with as he’s piecing together future stories.”

So there’s a good chance Stallone and his OG Guardians team will return in the somewhat near future, as Guardians of the Galaxy Vol. 3 is set for some time after the next two Avengers films.