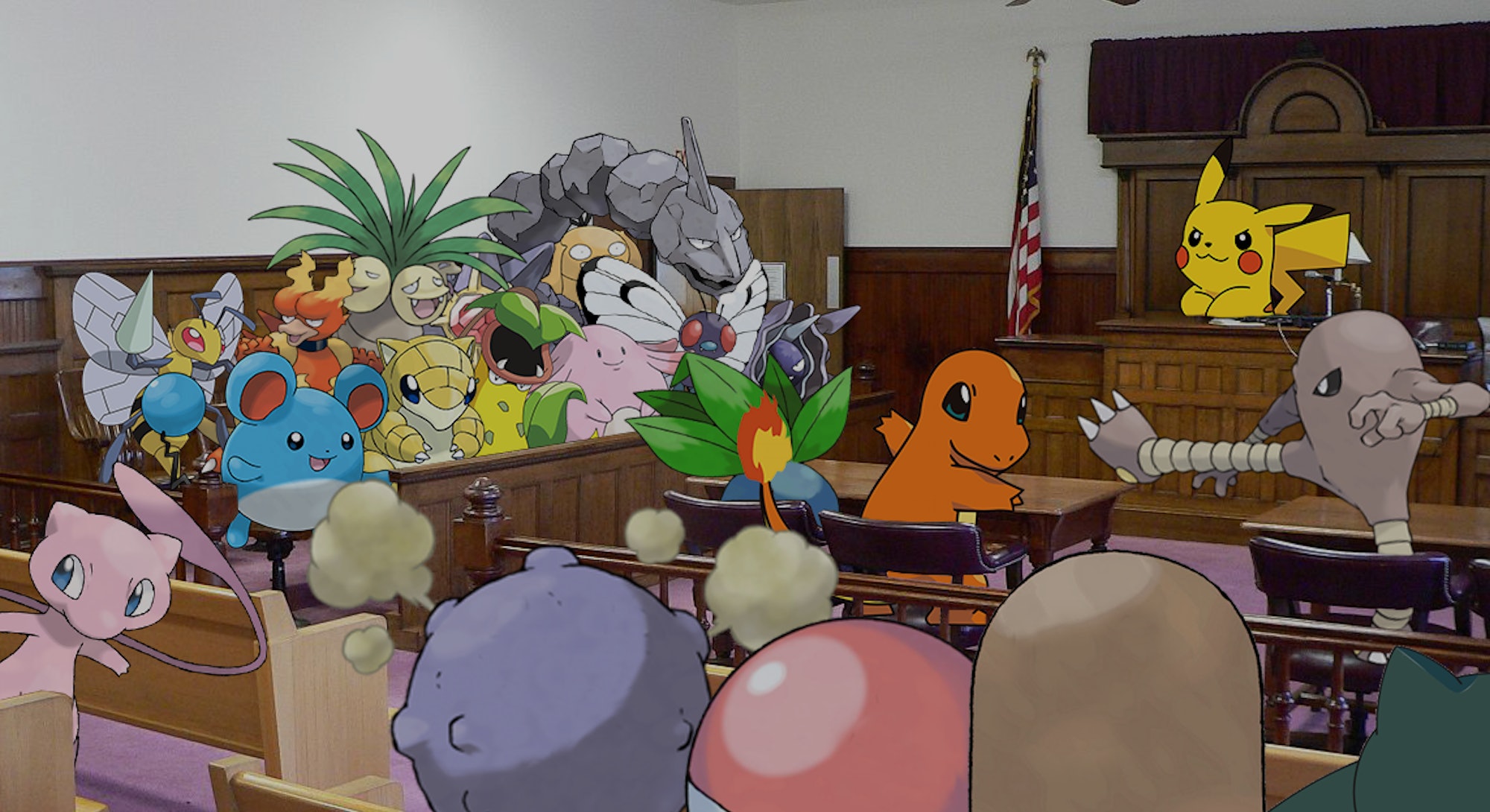 Even now, almost a year later, Sheldon Wasserman sounds surprised when he describes what went down in Milwaukee’s Lake Park last summer.

“People are beginning to run across the streets, parking is absolutely overloaded, the police are now ticketing, food trucks are showing up,” the Milwaukee County Supervisor remembers. “It was unbelievable. There’s no facilities to go to the bathroom. People are urinating on people’s lawns. You’re finding female napkins and feminine hygiene stuff all over the place.”

The Pokémon Go phenomenon was at its peak.

For months, the pandemonium continued, with gamers spending all day and night in the park along Lake Michigan, chasing after Charizards. Officials asked for cooperation and enforced the rules they could, but the park was still overwhelmed, so Wasserman proposed an ordinance that would regulate and restrict the use of public parks by augmented reality app developers. The law was passed in February by the Milwaukee County Board of Supervisors … and followed by a lawsuit filed in late April by a Nevada-based A.R. company named Candy Lab.

“The solution that [Wasserman] picked to solve, what he perceived as a problem, is regulating the publication of content,” Brian Wassom, the attorney representing Candy Lab in the lawsuit, tells Inverse. “And that’s been unlawful ever since we’ve had the First Amendment.”

And so, when the case is heard in court later this month, there will be more at stake than where people engage in late-night hunts for Charizards. The regulation of an entire burgeoning industry, and the interpretation of the Constitution in the digital age, could be impacted by the court’s decision in a case inspired by Pokémon.

Optimistic tech and business analysts have estimated that augmented reality could generate upward of $100 billion in revenue by 2020, but it’s still early. Few regulations have been tailored to its potential, in part because it’s unclear where the technology will go. Just a few years ago, people sounded the alarm over the privacy and safety concerns presented by Google Glass, but the early faceware proved unpopular, and concern faded.

There had already been some precedents governing the responsibility held by companies that create information overlay technology. In 1981, the aeronautical navigation company Jeppesen — now a subsidiary of Boeing — was found liable for a deadly plane crash in Las Vegas after a chart it created was deemed too vague for the pilots to properly use. The graphics that Jeppesen was deploying at the time were rudimentary compared to today’s 3D holograms, but the principle was established.

More recently, the FTC published guidelines in 2012 for companies that wanted to overlay ads in mobile apps, establishing that the typical truth-in-advertising rules applied in virtual and augmented reality. Similarly, because augmented apps collect heaps of data on users, including their location, they’re required to follow the same privacy laws as the rest of the internet.

But relatively few regulations were in place to deal with what happened last summer, and no city was truly prepared for Pokémon Go. The game swept the country when it was released in July, blanketing cities with digital monsters and sending obsessive players scouring busy streets and landmarks. Small businesses across the nation took advantage of the sudden influx of foot traffic, advertising special deals for players that stumbled upon unfamiliar coffee shops and restaurants. But not everyone welcomed the newcomers.

Niantic responded to public outcries and stopped Pokémon from appearing in places like the Holocaust Museum in Washington, D.C. and the 9/11 Memorial in New York. But it couldn’t be moved by every complaint, especially when the creatures weren’t crawling over quiet memorials to mass murder.

Residents in the toniest parts of Wisconsin’s largest metro area had no desire to catch ‘em all. Glued to their phone screens, Pokémon Go players marched through Milwaukee’s upscale neighborhoods, and descended upon the Frederick Law Olmstead-designed Lake Park at all hours of the night. Neighbors complained for months, and police blockades were erected and then tested, leading Wasserman, a long-time state assemblyman, to hold hearings on the matter.

Residents and gamers squared off in what the Milwaukee Record called “gloriously absurd” public hearings; residents wanted peace and quiet, while gamers demanded freedom to chase after Pikachus on land they paid for through taxes.

“The question came down to,” Wasserman says, “does an augmented reality company have any responsibility to the neighbors or community that they decided on entering?”

Players were knocking over port-a-potties, Wasserman says, spilling fluids and feces all over the city’s most prestigious park. Lawns were destroyed. Litter was everywhere.

“It was like The Walking Dead, except they were looking at their cell phones, bumping into people,” Wasserman remembers. The cleanup and nightly security required huge efforts, costing thousands of dollars. “I think the majority people who passed this ordinance understood that these companies should not be able to come in, exploit a community, not care for the damage done to the parks, the environmental damage, the facilities, and not pay for it,” he says.

At first, Wasserman wanted Niantic, the A.R. developer that teamed up with Nintendo to create Pokémon Go, to foot the bill. But “the response was not favorable,” he admits, and so he focused on what he could control: the law. Wasserman proposed that A.R. developers be required to apply for a permit if they want to direct people towards Milwaukee’s parks. The Board of Supervisors ultimately voted to approve the ordinance, creating an event application and review system for location-based A.R. apps.

Candy Lab recently released a new game called Texas Rope ‘Em, which puts poker cards in real-world settings, thus violating the Milwaukee ordinance. And Wasserman sees that ordinance as a fundamental abuse of free speech, with the content in A.R. apps no different than what’s printed in any other publication.

“All the game publishers do is publish software, and they put it in the app store, users download it, and then they take it from there,” he says. “They’re not organizing any events, they’re not telling anyone that they have to go anywhere or do anything. They’re setting up a game that people can choose to play.”

To Eugene Volokh, a law professor at UCLA and legal columnist for the Washington Post who has written about A.R. regulation, the distinction between speech and event is actually immaterial. The issue isn’t what the apps say, but how it impacts public spaces controlled by the government.

“It’s not that it’s speech or is it an event; you can have an event at the park which is indubitably speech,” he tells Inverse. “You could say ‘I’m going to have a political demonstration at the park’ and everybody would agree that is speech, and protected by the First Amendment. And yet the city is entitled to have a permitting scheme, which is aimed at making sure that there isn’t anybody else trying to use the park at the same time. The question is whether the speech is promoting the kind of event for which a permit could be required.”

Wassom, though, is concerned about the broader implications. Upholding the law could create a patchwork of regulations, he suggests, and begin a slide down a slippery slope toward regulation of speech in not just in augmented reality, but all digital formats. Wassom does have a particular interest in A.R. — he writes frequently on the legal issues surrounding the technology, and predicted issues Pokémon Go might face last year — and foresees a lot of issues that could hinder the industry before it really gets started.

“There’s No Reason Why It Would Stop at Games”

“The risk is that every municipality will take it upon themselves to adopt different rules about who can and can’t publish A.R. content and under what circumstances,” he predicts. “Having to pay permit fees to every single county, something like that would destroy the A.R. industry and the potential that it has to grow into the next mass medium of communication. There’s no reason why it would stop at games. They could regulate consumer review content, they could regulate navigation, entertainment, news-gathering, you name it.”

Legal precedents are important, but so are the way that decisions are framed. The Milwaukee case has the potential to make a big splash, but there are a few very large asterisks. First, Volokh points out that even if municipalities are permitted to regulate A.R. apps that create event-like gatherings in the park, the actual ordinance Wasserman passed may be an overreach.

Wasserman admits that he’s “a policymaker, not a management person.” And the ordinance as written reflects intention, but perhaps not feasibility. By requiring all A.R. apps to get a permit to send people to Milwaukee’s parks, the ordinance may have sabotaged itself.

“What is odd here is that they single out A.R. games regardless of whether they’re likely to bring a considerable amount of traffic to the park,” Volokh points out. “Pokémon Go might draw that traffic, but other [A.R. apps] don’t. The mere fact that the government is entitled to say you can have permits for large gatherings doesn’t mean that it’s entitled to say you have to have permits for all gatherings. Especially given that the permitting requirement imposes quite a burden, whether on somebody trying to organize a group outing or on somebody who is trying to organize gameplay.”

It’s on those grounds that the court may strike down this version of the ordinance, Volokh suggests. And if that winds up being the case, a newer, more narrow version of the law may be passed and then upheld, which would create a precedent that applies to public space and a smaller group of A.R. applications.

That would still create the potential for a patchwork system of local regulations, which could prompt the federal government to step in to provide a more blanket set of rules — though Volokh doubts that’s in the cards anytime soon. On Wednesday, a bipartisan group of congresspeople announced the formation of the Reality Caucus, with the intention of working with companies and monitoring issues that arise, but any concrete legislation is a long ways away.

Niantic is being sued by homeowners over Pokémon Go leading to trespassing on private property, which invokes negligence law — an important issue, but likely solved with an assumption of responsibility by users.

Given the flexibility of the technology, an alternative solution could see companies working with local governments to program tailored gameplay elements that ease the burden on public places. Niantic moved its Pokémon out of Lake Park at the behest of Milwaukee County, and other developers could direct players away from parks at certain times of day, or when too many people are in the vicinity. That, too, would be a patchwork solution, but one that didn’t set any potential constitutional precedents.

Wasserman himself would love to see that happen.

“The thing that I expressed very strongly to the Parks Department is that I want to work with these companies,” he insists, noting that he suggested a “Poke All Night” party for gamers in the park. “But I want to do it in a safe, secure environment for both the neighbors and the company, and have everybody work it out. I want them to play Pokémon. But we have to match what they want to do with the facilities of the neighborhood.”

That may well happen in Milwaukee, but to some degree, the law will now always be involved — or at least loom over — interactions between developers and local officials. That governments can set rules for their parks is not in question. Just how far that extends into private speech is what remains to be seen.

Neutral, of course, is often subjective, and no matter what, a new technology that has been mostly imagination and hype until now is just beginning to deal with reality.