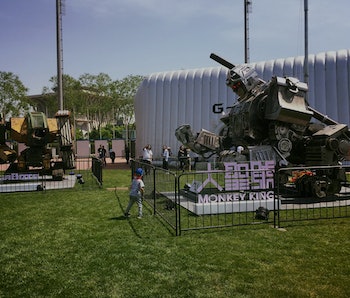 On Saturday, Megabots Inc dropped a video of a giant robot called Monkey King, a Chinese-built fighting behemoth that wants to join the giant robot battle scheduled for August.

Monkey King, built by Chinese robotics company GREATMETAL, has apparently thrown its swiveling-robotic head into the ring for a chance to join the ring with the American-built Mrk. III and Japanese-built KURATAS giant robots. Although it’s not clear if Monkey King will be allowed to compete, in the description of the youtube video posted by Megabots the startup refers to the creation of “international MegaBots Giant Fighting Robot Sports League.” Time to get ready for the robot wars.

The giant robot battle was initiated when Megabots, an Oakland-based robot startup challenged the Japanese giant-robot company Suidobashi Heavy Industry to fight last June. The call to battle was warmly answered, and the fight has been scheduled for August 2017 in a currently unreleased location.

The promo video for Monkey King was posted on the Megabots Inc Youtube channel, which was also the site of the original challenge and response that started the robot battle. In the description it calls Monkey King a prototype, and poses a few questions. “Do they have what it takes to be the first Chinese team in the international MegaBots Giant Fighting Robot Sports League?! Do you want to see our Mk.III robot fight Monkey King after the Giant Robot Duel with Suidobashi Heavy Industries?!”

According to the Megabots website, the giant robots are roughly 15 feet tall, piloted by a person inside the armor, and compete by shooting giant paintballs that travel at over 120 miles an hour. The site paints a dramatic picture of the battle itself, writing: “As the robots battle, armor panels shear off and litter the field, smoke and sparks pour out of the chassis, massive robotic limbs tear off, and robots crumple to the ground until only one is left standing.”

So far, it sounds like if Monkey King is accepted to the robot battle, the fight won’t be a three-way brawl, but a second match with the American Megabots Mrk. III robot. We don’t know much more about Monkey King, except that its design was led by Shiqian Sun, it can move on either two or four limbs, and it has a sweet rotating staff on its back. In the meantime, just imagine how awesome the international MegaBots Giant Fighting Robot Sports League could be. It could start the robot world war, but if the Kaiju actually attack we’d be ready for real-life Pacific Rim.