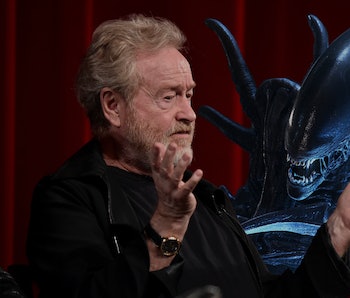 Ridley Scott, the creator of the Alien franchise, says he believes that aliens are real. Which, frankly, isn’t really a surprise.

The 79-year-old director, who is set to release Alien: Covenant in just a couple weeks, spoke to Sky News about “real” aliens.

“I believe in superior beings. I think it is certainly likely,” Scott said. “An expert I was talking to at NASA said to me ‘have you ever looked in the sky at night? You mean to tell me we are it?’ That’s ridiculous.”

Scott went on to claim that experts have calculated that there are “between 100 and 200 entities that could be having a similar evolution to us right now,” though it’s unclear where exactly he’s getting this info from. It sounds somewhat similar to the Drake Equation, which tries to calculate the odds of life in the universe, and he’s echoing similar sentiments that science luminaries like Stephen Hawking have expressed.

Scott’s professed belief in alien life isn’t that shocking or rare — and his belief that any would-be extraterrestrial visitors are out to get us makes sense, given his experiences with Xenomorphs.

“So when you see a big thing in the sky, run for it,” he said. “Because they are a lot smarter than we are, and if you are stupid enough to challenge them you will be taken out in three seconds.”

However, even though the guy who makes terrifying alien movies believes in scary aliens, he personally isn’t scared — because he has a gun.

Alien: Covenant hits theaters on May 19.