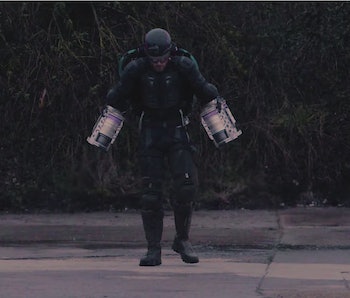 Richard Browning’s father, Michael Browning, always had a passion for flight. But he probably never imagined that his son would be the first person to strap six jet engines to his body and levitate himself off the earth, controlling his hovering flight with sheer physical strength and training. Browning told the story of his remarkable journey from the Royal Marines to a human flight startup, Gravity, at a Ted talk on Thursday.

Browning first revealed his remarkable suit in a Red Bull-sponsored video at the end of March, but he’s been working on it for years.

Browning started by buying a single miniature jet engine and strapping it to a washing machine. When he saw how much force it produced, he started thinking. He tried one engine in a gauntlet, to see how manageable it was. Then two engines, then four.

“This whole journey was very much about trying things and learning by failing at them most of the time, and that included failing by falling over,” he laughed.

But after a few failed designs, Browning says, the DIY suit was “starting to make some quite convincing progress, just enough to think that maybe we were starting to get there.” His determination is very personal: Browning’s father committed suicide when Browning was 15, leaving behind “a lot of unfulfilled ambition.” That determination seems to have made him resilient to failure and to falling over (which is a mild way of saying “crashing with six jet engines strapped to you”).

In a new configuration — four engines on the arms, two connected to his lower back, Browning was able to achieve six seconds of “reasonably coherent flight.”

Still, Browning doesn’t think that his incredible invention is going to be widely adopted yet. “I don’t think anyone is going to be going down to Walmart or taking the kids to school anytime soon in one of these things,” he said.

Part of that is due to the physical stress of using the machine. Browning is an ex British Royal Marine who is still in peak physical shape and performs a variety of calisthenic exercises every day to withstand the torque and force of the jet engines strapped to his arms. The suit itself is a DIY mishmash of jet engines, wires, and what look like motorcycle pads complete with heavy riding boots and a large helmet. Right now, Browning is the only one who can really fly it, but he said he’s currently looking for pilots two and three.

His military service also means his friends in the service are paying attention. Browning said that military researchers have told him that out of all the Iron Man-like inventions they’ve pursued, they usually scratched human flight off the board. But his suit, he says, convinced them that maybe it wasn’t impossible.

You can watch Browning fly outside of the TED conference, where he put on a practical demonstration after his short talk.