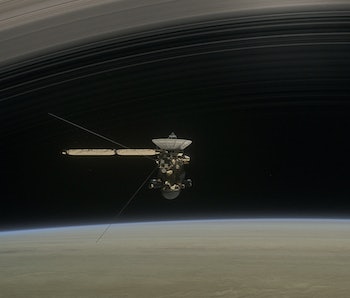 In its final chapter, which NASA is calling the “grand finale”, the Cassini spacecraft had to make a sharp dive into the gaping abyss between Saturn and its rings, leaving scientists in the dark for 20 long hours.

“In the grandest tradition of exploration, NASA’s Cassini spacecraft has once again blazed a trail, showing us new wonders and demonstrating where our curiosity can take us if we dare,” Jim Green, director of the Planetary Science Division at NASA HQ, said in a release on Thursday.

When Cassini’s signal finally came back on, scientists knew that it had just come within 1,900 miles of Saturn’s cloud tops and within 200 miles of the innermost edge of the rings. That’s a very narrow window of opportunity, but Cassini came out a champ.

“No spacecraft has ever been this close to Saturn before,” Cassini Project Manager Earl Maize said. “We could only rely on predictions, based on our experience with Saturn’s other rings, of what we thought this gap between the rings and Saturn would be like.”

The real lifesaver for Cassini was its large dish-shaped antenna, which it used as a shield. Now, it’s delivering never-before-seen data and images of Saturn’s atmosphere to NASA. These images are unprocessed — at 77,000 mph it’s kind of difficult to take a clear picture.

Cassini has 21 more dives just like this one to make before it ends its mission. On September 15, 2017, it will plunge into Saturn’s atmosphere, burning to a crisp, completing a 20-year-long mission. Though the spacecraft’s days are numbered, it will never be forgotten as one of the most magnificent endeavors of NASA to date.