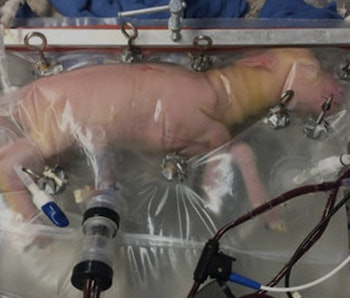 When human babies are born prematurely, they’re quickly transferred to a warm, sterile incubator to maximize their chances of survival. But while incubators have saved many preemies, the plastic boxes look and feel nothing like a mother’s uterus. Scientists couldn’t help but ask: Could more babies be saved if they were incubated in an environment that actually resembled a womb?

That question is what led a team of doctors at the Children’s Hospital of Philadelphia to raise a bunch of pink, hairless premature lambs inside clear plastic bags filled with a warm, clear fluid. As the team reported in a new study in Nature, the attempt at building an artificial womb was a success: They managed to raise eight fetal lambs — who were at roughly the same stage of development as a 22-week-old human — inside the “Biobags” for up to four weeks.

A mother’s womb, of course, is more than just a bag filled with fluid to cushion the fetus while it bounces around. The uterus, together with the umbilical cord connected to it, is the baby’s source of nutrition and, importantly, oxygenated blood. In the past, researchers who have attempted to raise animals in artificial wombs — Japanese scientists were the first to do so in 1996, to limited success — have tried to recreate these functions in their devices, but the research was always thwarted by the same problems.

As the Nature article outlines, one major issue was the stress that the artificial circulatory system put on premature hearts. In the artificial systems, the movement of oxygenated blood through the fetus’s body was always powered by a pump, which often proved to be too much for its delicate organs to handle. Then there was the issue of contamination: With open fluid incubators, the “amniotic” fluid that flowed in and out of the fetal body was quite susceptible to pathogens, which upped the chances for sepsis. Finally, attaching the fetal circulatory system to the device’s tubes was often difficult because certain blood vessels turned out to be especially prone to spasms.

The Philadelphia doctors described how their new system deals with each of these problems in their paper:

To address these obstacles we have designed a system consisting of three main components, specifically, a pumpless arteriovenous circuit, a closed fluid environment with continuous fluid exchange and a new technique of umbilical vascular access.

In the Biobags, the fetal lambs could move around, had “apparently normal breathing and swallowing movements,” and even grew wool as they developed. Two of the lambs were injected with insulin, which improved their ability to take in nutrients and grow. The amniotic fluid was constantly in motion so that fetal waste could be swept away (human fetuses don’t usually poop, but they do urinate and accumulate bile and dead cells) and sterile conditions could be maintained. Most importantly, the pumpless system prevented damage to the fetal heart, and researchers report “no instances of cardiac failure in our developmentally relevant lambs.”

While the researchers admit that even premature lambs are much larger and less delicate than premature humans, they’re already setting their sights on applying this technology in hospitals, noting that the system would probably be best used for the “23–25-week extreme premature infant.” Because fetuses at that stage, being only slightly halfway through development (babies are usually born at 40 weeks), are at especially high risk for death or illness, the use of experimental techniques like the Biobag will likely be considered justifiable, as long as it’s proven to be safe. If all goes according to plan, they hope clinical trials on humans can begin in as soon as three years.

More like this
Mind and Body
Sep. 25, 2022
Why just one case of polio is cause for alarm — a virologist explains the dreaded disease
By Rosemary Rochford and The Conversation
Science
Sep. 25, 2022
Why do cats love cardboard boxes? Pet experts decode the obsession
By Tara Yarlagadda
Science
Sep. 23, 2022
We finally know how many ants are crawling the Earth right now
By Jennifer Walter
Related Tags
Share: