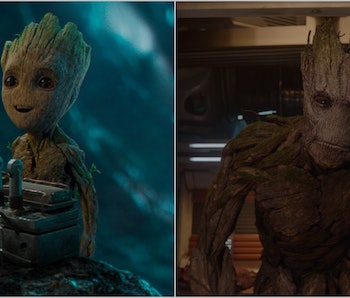 Guardians of the Galaxy sure seems might futuristic, since it takes place in an advanced, far-off galaxy, but the upcoming sequel, Vol. 2, actually takes place in the past. That means, as Marvel Studios boss Kevin Feige explained on Monday, there’s going to be a fairly significant timeskip between Vol. 2 and the Guardians’ next appearance in Avengers: Infinity War.

While speaking to CinemaBlend during a press day for Vol. 2, Feige recounted how director James Gunn wanted to make sure the sequel picked up just a few months after the original film left off. Since Guardians of the Galaxy is one of the few Marvel films to explicitly date itself (since it takes place 26 years after the prologue set in 1988), that means that the sequel isn’t set in present day. The first film came out and was set in 2014, while Vol. 2 is not set in 2017.

Since Infinity War isn’t due out until May 4, 2018, and it will presumably be set roughly in that time period, that means four in-universe years will have gone by. Star-Lord and the gang are going to have lots of adventures that we’re not going to get a chance to see — and perhaps, they’ll do some growing up.

“They will have evolved slightly, in some recognizable ways. But really they’ll be the Guardians and dealing with the shit storm they have to deal with,” Feige said.

So, Baby Groot might not be a baby the next time we see him.

Guardians of the Galaxy Vol. 2 hits theaters on May 5.