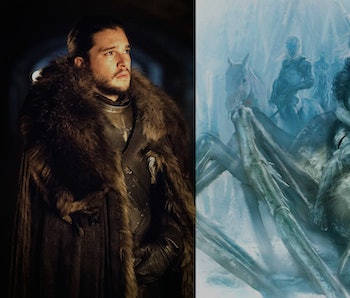 Winter is coming at last in the penultimate season of Game of Thrones, and with it comes terrifying, giant Ice Spiders.

Daenerys Targaryen will be in Westeros in Game of Thrones Season 7 and Jon Snow will visit his mother’s tomb, according to the first batch of photos released from the season. Although these two events are new and intriguing, they aren’t exactly surprising considering that Season 6 left Dany sailing to Westeros and revealed to viewers that Lyanna Stark was Jon’s mother. An event that would be surprising, however, is the arrival of fucking terrifying giant ice spiders.

If you take a closer look at the photo of Sam and Gilly at the Citadel, the text they’re pouring over is from The World of Ice and Fire. This is a text that exists both within the universe of the story and outside of it as a published companion to The Song of Ice and Fire series. The page Gilly is reading concerns the legendary hero Azor Ahai, who is supposed to be reborn to save the world from darkness, according to prophecy. Many fans believe this promised savior — also known as “The Prince that Was Promised” — will be Jon Snow.

Naturally, that’s the part everyone is focusing on. But as The Huffington Post points out, the remainder of the page references giant ice spiders that the White Walkers use. Little is known about the creatures save for the fact that the White Walkers supposedly use them as mounts and they are the size of hounds.

Old Nan mentioned them to Bran back in Season 1. In the books, Sam references reading about giant ice spiders in both A Storm of Swords and A Feast For Crows.

Here’s art detailing what an Other riding a giant ice spider would look like:

Forget The Night’s King — Jon Snow might have to fight a giant ice spider.