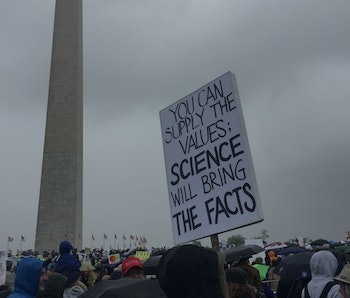 Like any good protest, rally, and march in the tumultuous, volatile year that has been 2017 thus far, the March for Science was chock full of people with handmade signs with clever clapbacks in defense of science. And despite pouring rain that threatened to make these elaborate magic marker masterpieces run, science supporters of all kinds came out in full force with signs that proudly rocked double entendres, political “oh no she didn’t!”s, and earnest appeals to protect science and therefore, humanity.

Here are some signs that withstood pouring rain and made cheeky statements that engendered the occasional chuckle, the raised eyebrow, and/or the snide reference to high school chemistry class.

Despite pleas from organizers to maintain a non-partisan stance, protestors brought their snarkiest hurls yet, aimed toward President Donald Trump.

Not Sure What Chemical Compound This Is …

Among a crowd of Ms. Frizzle cosplayers was this callback to the red-haired one’s mantra for scientific exploration.

Do it for the Bears

Don’t mess with this polar bear.

Polar bears, in fact, had quite the representation on the grounds.

Spotted: An alternate option if flat-Earthers tire of their preferred shape.

Do You Even Ohm?

A shy defender of science has a simple message.

Scientific Funding is Going the Way of the Dinosaurs

It’s not quite a sign, but this is a surefire way to get people to pay attention to science: Remind them with a growling dinosaur and his posse warning onlookers that we’ll be heading to the land before time if we keep defunding science.

Four Score and Seven Atmospheres Ago

Another not-quite-a-sign moment, but even Honest Abe seems to be on the side of science.

More like this
Science
6.19.2022 1:00 PM
What is my dog thinking? Science may finally have an answer
By Tara Yarlagadda
Science
15 hours ago
The powerhouse of the cell has a more complicated origin than we thought
By Viviane Callier and Knowable Magazine
Science
14 hours ago
NASA lit 1,500 fires on the International Space Station — and discovered something new
By LAURENCE TOGNETTI and Universe Today
Share: