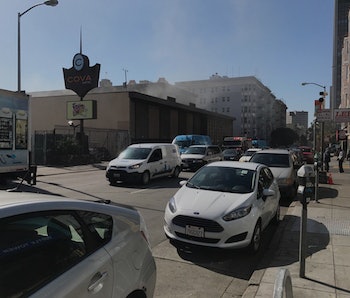 On Friday, power outages in New York, Los Angeles, and San Francisco caused a huge disruption in three of the country’s biggest cities. Although it’s still not clear what caused the outages in New York and Los Angeles, city officials and local media report that a fire in one of Pacific Gas and Electric’s substations caused the outage in San Francisco.

While the outages caused public anxiety about the possibility of a cyber attack, it looks like the blackouts are probably coincidence. In San Francisco, Reuters reports that a fire at a PG&E substation started around 9 a.m. Pacific this morning, causing the outage that shut down large portions of the city.

Firefighters subdued the blaze at the station on 600 Larkin Street after about three hours, according to Maureen Kelly of San Francisco’s local Kron 4 News, who was tweeting from the scene.

Despite anxieties and conspiracy theories about the possibility that the outages were caused by some kind of cyber attack, there has been no evidence to link the outages in three cities. Identifying the fire as the cause of the power outage in San Francisco makes the case for coincidence even stronger.

The San Francisco police department directly addressed concerns about the power outages in New York and L.A. Friday afternoon. The tweet emphasized that the San Francisco outage occurred due to equipment failure, which caused the fire at the Larkin Street substation, and was not related to the other outages.