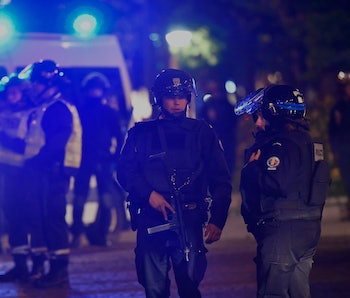 The shooter who killed a police officer and wounded others along Paris’s Champs-Élysées on Thursday may have used Kalashnikov rifles, report eyewitnesses. We don’t yet know enough about the event to apply a “terrorism” label, but that didn’t stop the internet from doing so at the mere mention of the word “Kalashnikov.” So what is the weapon, and why does it have that association?

The tendency to relate Kalashnikovs with terrorism didn’t come out of nowhere: They’re the weapon of choice in guerrilla warfare. They’re light and easy to use, which means that they require limited training and no previous experience with combat; they’re often used by child soldiers. Their simplicity is offset by their relatively poor aim — you wouldn’t use one to hunt an animal — but they work well for killing humans, especially at a close range.

Still, they’re not just used by terrorists. The weapons have reached near-ubiquity and are used in most major conflicts around in the world (they’re versatile, and can be used and stored in pretty much any environment, from Siberia to the Sinai).

Video games, films, and TV shows have also promoted the association of terrorists with Kalashnikovs by frequently depicting that stereotype.

There are many variants of the Kalashnikov, including the famous AK-47, but the first was designed by Mikhail Kalashnikov in 1947 for the Soviet government. The gun was an immediate success, and soon began to be manufactured in other countries. When a new model of the Kalashnikov was made by the Soviets in the 1970s, they took millions of the guns out of commission and sold them in the global arms trade.

The association of Kalashnikovs with terrorism has been around for decades. One of the main historical events that helped promote this linkage occurred in the aftermath of the Soviet-Afghan War, which led to a massive influx of Kalashnikovs into Afghanistan, both from the Soviets themselves and from the U.S., which supplied them to the anti-Soviet mujahideen. When the conflict ended, the weapons remained, and were used by first warlords and then the Taliban.

France has had a tragic recent past with Kalashnikovs. They were used in the infamous January 2015 and November 2015 terrorist attacks (along with other weapons) and lots of non-terrorist criminal activity in recent years. In 2010, French police reported that their seizure of illegal firearms had grown by 79 percent, and that an increasing number of the weapons were Kalashnikovs. France does have strict gun laws, but smuggling these weapons isn’t prohibitively difficult, both because of the European Union’s open borders and because they’re transferred in small quantities through what’s known as the “ant trade.”

All of this said, we don’t yet know the motivations behind this most recent attack in Paris. It’s not terrorism until we know for sure.

“I am proud of my weapon but I am sad that terrorists use it,” Mikhail Kalashnikov said in 2009. “I wish I had invented a machine which people could use, which could do good for farmers — for example, a sowing machine.”

More like this
Science
Feb. 1, 2023
‘Golden Boy’ mummy CT scans reveal 2,300-year-old burial traditions
By Robin Bea
Culture
Feb. 7, 2023
Lost Never Solved Its Weirdest Sci-Fi Mystery, But This Episode Came Close
By Jake Kleinman
Culture
Feb. 4, 2023
The End of the Cold War Could Have Killed James Bond. Instead, it Made Him Stronger.
By David Grossman
LEARN SOMETHING NEW EVERY DAY.
Share: