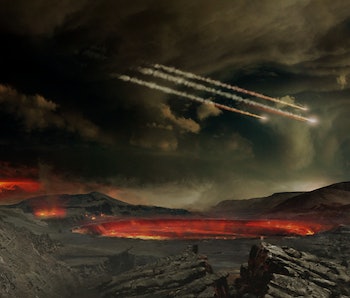 Unlike the dinosaurs, humans have a pretty good idea of what will happen if a six-mile-across asteroid smacks the planet, thanks to a new study that ranks the lethality of the worst effects of such an impact.

“This is the first study that looks at all seven impact effects generated by hazardous asteroids and estimates which are, in terms of human loss, most severe,” Clemens Rumpf, lead author of the study and senior research assistant at the University of Southampton in the United Kingdom, said of the findings.

The results, published in the journal Geophysical Research Letters, were compiled by working with computer simulated models of high magnitude impacts to land and sea, and how they would have riptide effects across the globe. Here are the worst-case scenarios ranked by severity:

The earth would likely rumble, but as the least devastating effect, it would only account for about .17 percent of the total lives lost. In a world with seven billion people, though, that’s still around 11 million people. So, NBD.

Still less than one percent, cratering left by an impact would cause infrastructure like bridges and homes to collapse into giant pits. But, because this is the result of a direct hit, it would have to be in a major city or populated region for it to cause true destruction.

Just as we saw with the meteor impact in Chelyabinsk, Russia in 2013, the majority of injuries and deaths were caused by broken glass flying into unsuspecting faces watching the blast through their windows. Ouch.

Giant waves would probably be a larger issue if the asteroid hits the ocean. As most humans live on the coast, however, this could lead to up to 70 to 80 percent of losses. But, inland humans would be saved, so it kind of defeats the purpose of an asteroid. Kind of.

Accounting for 30 percent of fatalities, thermal radiation would roast humans to death, or at least result in some pretty horrendous burns. If a human survives this one, the radiation would most likely lead to poisoning or cancer in the end.

Overpressure shocks from an impact are tied with the worst of the worst and could lead to the rupture of internal organs, meaning humans could literally explode. Unless you’re superhuman and made of adamantium, you won’t be surviving this one.

There’s a reason wind blasts are tied with overpressure as the most gruesome. After a large enough blast, bodies could be blown to bits, burned up, or dislocated and thrown across the state. Both pressure shock and wind blast would account for 60 percent of total fatalities.

This chart breaks down the effects depending on a land or sea impact:

The scientists believe this study will help mitigate the effects of a asteroid strike, saying that small towns in the target area would be better off evacuating. But, if it’s going to hit a large city, we may want to consider launching a missile at the rock.

As cynical as it may seem, this study is our best hope for getting out of the way. Luckily, Rumpf says, “the likelihood of an asteroid impact is really low.”