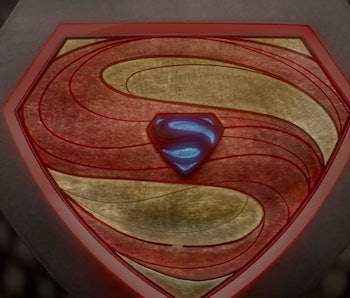 Update: The trailer has been pulled as it is not official.

Most Superman origin stories tend to pick up mere moments before his home planet, Krypton, explodes, killing the baby Kal-El’s parents and almost every other member of his species while he hurdles toward Kansas in a space ship. However, Syfy’s upcoming Krypton TV series starts much, much earlier than that. As seen in the first trailer, the prequel follows Superman’s grandpa as he fights against oppression on a high-tech, sci-fi planet.

Syfy first announced the show way back in December of 2014, so you’ll be forgiven if you forgot about it, but the first trailer, which hit the web on Tuesday afternoon, looks pretty good. Aside from the classic Superman “S” icon and a few familiar proper nouns, there’s not a lot of Krypton that’s recognizable of the superhero genre. Really, the vibe is much more Doctor Who meets Dune, and the effects look pretty slick.

Krypton focuses on Seg-El, Superman’s grandpappy (spelled Seyg-El in the original John Byrne comics that the series appears to be very loosely based on). At this point in the planet’s history, the House of El is in disgrace, and Sel-El needs to lead a rebellion against the corrupt ruling class. One shot shows him potentially having sex with Lyta Zod, a member of the planet’s military class, so there’s potential that this series will be hotter than a red sun.

For what it’s worth, the best Superman origin is still the first page of Grant Morrison and Frank Quitely’s All-Star Superman, which is breathtakingly efficient and powerful. David S. Goyer’s Krypton TV series seems a whole lot more complex, but chances are it’ll find some fun stories to tell.

Krypton is expected to premiere on Syfy later this year, though no specific date has been announced yet, as it is still a pilot.