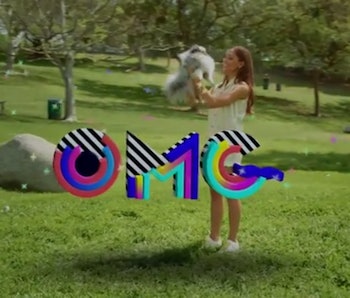 World Lenses work just like traditional face filters, but they use the back camera and they’re not locked to a particular point in the scene. Rather than tracking a particular object like a face, these digital additions can be moved manually by dragging them around the screen, and resized or tilted just like text. It’s a little difficult to figure them out — just tapping on the center screen, rather than holding down, will open the menu, letting you scroll through different lenses like you would face filters.

One of the World Lenses lets users place and size a smiley rainbow, while another more interactive lens involves throwing seeds that sprout digital plants wherever they land. Others simply dress up the world by making it look like you’ve added a disco ball to the room, without adding any 3D objects to the scene. There are currently 15 World Lenses available, in total.

For a better look at what World Lenses can do, check out the announcement video below.

The announcement came on the same day that Facebook announced its new, wide-ranging camera technology aimed at bringing 3D and augmented reality features into the fold. It’s a big coup for Zuckerberg, to be able to steal some of Snapchat’s thunder with this announcement when Snapchat began the A.R. race with such a huge lead in both technology and mindshare.

Snapchat has its work cut out for it, offering a much more specific and limited service than the Facebook-owned Instagram, which recently announced that its own Snapchat-inspired Stories feature gets more daily views than Snapchat itself.

Large companies seem to now be able to master a technology within about a year of the time they first see it in a rival’s product, meaning companies like Snapchat could get left behind no matter how innovative they were to begin with.