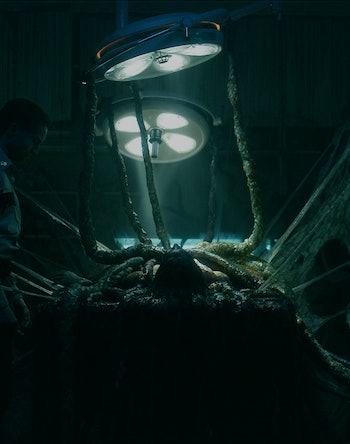 Jeremy Gillespie and Steven Kostanski will go to hell and back to terrify their audience. The Void, Gillespie and Kostanski’s latest project together, is a far-reaching hospital horror that combines just about everything that’s ever kept you up at night: the occult and extreme body horror, self-mutilation, botched surgeries, puss-oozing monsters, tentacles in eye sockets — you name it, this movie’s got it.

The Void, dreamed up while the filmmakers were at Fantastic Fest in 2011 for the premiere of their movie Manborg, is a location nightmare. The hospital hosts a wide array of characters, from medical professionals and police officers to criminals and a pregnant teenager. But there are some very inhospitable interlopers wearing white robes and wielding knives, and soon enough, they’ve taken the place hostage. And they’re not looking for mere money; they’ve got chaos on the brain. Soon, monsters run rampant through the halls, experimental surgeries are performed to resurrect the dead, and a stairway leading to a hellish dungeon manifests out of thin air.

Gillespie and Kostanski spoke with Inverse about their inspirations for this disturbing cosmic dream of a film and the challenge of making all those gag-inducing tentacles.

What initially inspired you guys to make The Void?

Steven Kostanski: At Fantastic Fest, Jer pitched me this idea that he wanted to make a horror movie in a hospital, and he had a few key images in mind that he had already come up with. So, I was right on board because I’m a huge fan of hospital horror but also survival horror games like Silent Hill and Resident Evil, and those typically take place in hospitals. We were doing comedy up to that point. So that was where the initial idea came from.

What were those key images you had in mind originally?

Jeremy Gillespie: The pyramid was the first image that came to me. It was inspired by Guillermo del Toro. He was making At the Mountains of Madness before that went down. I was working in an office next to him, and I remember hearing him say how they were gonna do Lovecraft in a way you’ve never seen before. I was like “What would that be like?” and it just sort of got the ball rolling, the wheels turning in my head, and suddenly I had all these images appear.

Any particular Lovecraft stories that stood out to you for this?

Gillespie: Not really. I mean, we both love that stuff, but I don’t think there was any specific kind of Lovecraft thing that we were riffing off of. I think we appreciate his sort of overall mythology and the idea of this grand cosmic unknown, that there’s life behind everything. If you encounter it, it will destroy you perhaps.

What was your inspiration for those creatures, the damned things that Doctor Powell created in his workshop?

Kostanski: I think we drew inspiration from a lot of things. The creatures in games like Silent Hill are really abstract. We wanted to make things that were kind of never seen before to a certain extent, and also things that, when you look at them, you don’t really know what you’re looking at. Obviously, when we set out to make a creature movie, we had to consciously avoid some of the obvious inspirations. We tried to steer away from things like John Carpenter’s The Thing.

Gillespie: When you’re doing a creature movie like this, practically, it’s hard not to get compared to things like The Thing, The Fly, those sort of classic creature movies. Our appreciation for that stuff comes way more in the artistry of it. Also, in addition to what Steve mentioned, a lot of Japanese horror stuff came up quite a bit. There’s an artist, Junji Ito — we took a fair amount of inspiration from him, too.

There are a lot of tentacles involved.

Kostanski: Yep. No shortage of that.

Gillespie: Not the easiest thing to do, it turns out.

Kostanski: It turns out they’re the hardest thing to do in practical effects.

What makes them so difficult?

Kostanski: Well, we needed a lot of them. One of our creature effects artists, David Bishop, he was a bit of a genius. He came up with a very simple and effective way of making a whole bunch of tentacles on the cheap, because obviously we were a super low budget movie and so he actually figured out to use bubble wrap wrapped in latex with a chain running through it.

So, that was the basis for a lot of our tentacles. But we also used every technique we could. There were also cable-operated tentacles operated by compressed air. We used as many techniques as possible to give variety and make them seem as organic as possible.

Gillespie: We had one really cool one made out of a measuring tape, wasn’t it?

Kostanski: Yeah, the one that another one of our creature effects artist, Chris Nash, made was a tentacle that could actually — it was a gag. The tentacle would puncture someone’s leg and then wrap around it. So he made that using a measuring tape and a length of rod. So, the rod would keep it rigid as it punctured the leg but then as he’d pull the rod, the measuring tape would wrap around the leg. It gave it a really organic effect.

Gillespie: There’s what we call the “meat blob,” which was sort of just a plastic bag that was getting filled with a hair dryer that was the coolest looking thing in the movie.

Kostanski: It was the most convincing thing, yet if you step outside the frame and look at what it is, it’s the goofiest-looking thing you can imagine, and just the cheapest-looking thing. But sometimes the most effective stuff is the cheapest, and the simplest techniques are always the best.

Gillespie: There’s a creature that sort of has all this webbing coming out of it, which is just plastic saran wrap. On camera, it looked incredible.

Kostanski: I’d say half the creature effects in the movie are made out of bubble wrap and plastic wrap and rolled-up latex.

Is there any gore sequence in particular that took a lot of time or effort or you were surprised by?

Gillespie: Every single one. Everything was a surprise about how difficult it was.

Kostanski: That’s kind of the secret to practical effects is that they don’t work, like, 95 percent of the time. So you’re basically doing shot after shot after shot trying to get it to look good. You end up shooting like 10 minutes of footage and 2 seconds of that is convincing and that’s the part you put in the movie. But Bloody Hole Face, [one of the monsters,] was fun because he was just a hand puppet. There’s nothing glamorous about it. It was just a guy in a mask for the majority of shots, except for the shots where he’s stabbing his face, then it was just somebody out of frame holding the puppet and slamming it into a pipe. But if you get the right amount of slime and the right amount of blood and light it well, then it’s super convincing.

Gillespie: I think one of the chintzy-est effects in the movie, where a monster crushes somebody’s head, turned out great. Such a low-fi technique of doing it, but again, once it’s edited in, it works really well.

Kostanski: That was just a balloon full of blood.

Finally, what were some of your guys’ favorite scenes to shoot in the film?

Kostanski: I’ve got to say, shooting the insert effects after the main shoot, that was pretty good. I thought that was pretty satisfying. We basically rented a small studio space and got a bunch of local Toronto film effects people to come out and pretty much work for free. We would set our own hours and shoot all the effects that we needed for the movie to fill out all the creature sequences because you can only get so much out of the day when you’re shooting principal photography, so we had to amp up a lot of the scenes and shoot a lot of inserts. It was fun because you could focus for four hours on just one shot to make it look just right.

Gillespie: It is really fun to problem-solve and figure out how to connect things together with one shot where you’re very limited in terms of what you can show because you don’t have the location or the actor.

Kostanski: And figuring out what’s the one part of the set that we need to recreate so that the audience can connect. That problem-solving component was a lot of fun.