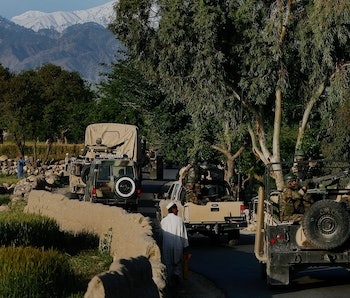 At 7:32 p.m. local time in Afghanistan on Thursday, the United States military dropped a GBU-43/B bomb, also known as the “Mother of All Bombs” (MOAB), on an ISIS tunnel complex. It was the biggest non-nuclear bomb the U.S. has ever used in combat, though it’s still significantly less destructive than an actual nuclear weapon.

With most pundits focusing on the large-scale impact of the bomb itself, little is being said about the region in eastern Afghanistan in which the explosion occurred. The target was in the Achin district of the Nangarhar province, which is near the border of Pakistan. Here are five things you need to know about the area.

It’s about 130 miles from Kabul, the country’s capital, and 30 miles from the nearest big city, Jalalabad. Its terrain is mountainous and full of forests. Residents are mostly involved in agriculture work, especially growing crops like wheat, tobacco, poppy, and maize.

4. It’s Near the Pakistani Border

Achin is only around a mile from the border of Pakistan, a border known as the “Durand Line” which has been contested for years, and which the government of Afghanistan does not officially recognize. The location has allowed ISIS to easily receive supplies and recruits from Pakistan. It’s a convenient place for insurgents; Taliban and Mujahideen forces historically used the area, also.

3. It’s Where Most of the ISIS Presence in Afghanistan Is Concentrated

In fact, a member of the U.S. Special Forces was killed there on Saturday while conducting counterterrorism operations. There are estimated to be around 600 to 800 ISIS fighters currently in Afghanistan, most in the south of Nangarhar province, which includes Achin.

A 2006 census, which is definitely outdated, identified the population as 95,468. Another estimate puts the population around 150,000. There is no official word yet on whether civilians (or even ISIS fighters) were killed in the attack, but it is certainly possible. The Guardian reports that a resident said that the area hit by the MOAB had been totally taken over by ISIS fighters: “There is no way that civilians were still living there.” However, the same article mentioned that at least two civilian casualties were already suspected.

1. The Spot Hit by the Bomb Hosted the Kind of Terrain for Which the MOAB Bomb Was Designed

An Air Force official told Vox that the weapon was “primarily intended for soft to medium surface targets — targets like a cave and canyon environment.” One of the reasons why MOABs aren’t often employed is because few targets fit this bill. According to the U.S. military, the Achin tunnels were a rare exception.

More like this
Innovation
6.24.2022 5:00 AM
Beam-steering radio technology could help autonomous cars finally hit the road
By Sascha Brodsky
Culture
3 hours ago
8 Norse gods you need to know before Thor: Love and Thunder
By Robin Bea
Culture
2 hours ago
64 years ago, Hollywood made the most rip-roaring Viking movie ever
By Emil Stern
Share: