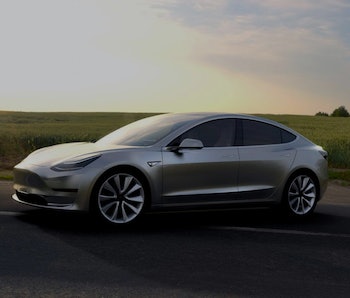 Tesla wants the upcoming Model 3 to be the first electric car for everyone, but to do so, it’ll need a seriously amount of infrastructure in place. Fast charging is critical to the electric car’s success — drivers need to be able to top up the car’s juice in an emergency — but Tesla’s network of fast chargers might not be adequate for the company’s production targets.

We don’t know for sure how long the Model 3 will take to charge, but we can reach an approximation based on Tesla’s current range. The 90kWh Model S, with a range of 294 miles as tested by the EPA, takes around 10 hours to charge from a NEMA 14-50 power outlet. From a wall connector, that can drop to as low as five hours and 30 minutes.

The Model 3’s capacity is likely to follow similar lines. The company quotes a 215-mile range per charge on the base model, and while we know that the car’s wheelbase stops the company from offering a 100kWh option, it’s likely Tesla will offer a range of battery solutions.

Five hours is good for overnight charging, but for rapid boosts, it’s not that great. Tesla offers a global network of supercharging stations specially designed to provide up to 120 kilowatts of power to its vehicles. The 90kWh Model S can charge from zero to 100 percent in just 75 minutes, or from zero to 80 percent in 40 minutes.

Unfortunately, there’s not really enough to go around. There are 828 supercharging stations around the globe with 5,339 charging points, and the company has plans to double the number of stations in North America alone. But in the last quarter alone, Tesla delivered 25,000 cars, and by the end of 2018, it wants to ramp that up further by producing 500,000 cars annually. If charging stations are few and far between, and the ones that are available are full, it will be hard to justify buying a Model 3.

One of the big issues is that the company has been using its own style of charging port to reach these higher speeds, while most other car companies have used common standards like CHAdeMO or SAE J1772. Owners looking to use other charging stations have needed to rely on adaptors to use third party charging networks like Blink, which has over 4,000 stations. The best solution will be to use a standard charging port that allowed for these high speeds.

There are signs that this could change. Electrek notes that the company has signed up to the CharIN group to promote a standardized combined charging system. The standard allows for charging up to 200 kilowatts, nearly double the output of the superchargers. If third parties were allowed to produce these high-powered points, it could increase the rate of infrastructure building.