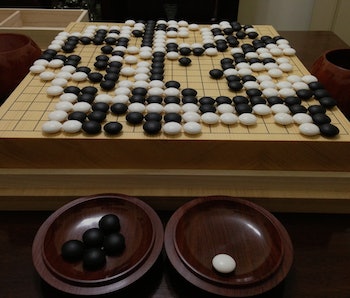 In March of last year, Google’s revolutionary AlphaGo A.I. beat one of the world’s highest ranked players in a 5-game tournament of the ancient Chinese game of go — but that was just one of the highest ranked players. The victory made headlines as a seminal moment in the short and eventful history of artificial intelligence, but many in the media still longed to see AlphaGo perform against the very best humanity has to offer. Today, Google’s DeepMind A.I. development house challenged top-ranked 19-year-old go prodigy Ke Jie, in an attempt to bury any remaining doubt about whether machines have truly come to dominate the game of go.

Like the chess prodigies of Western fame, Ke Jie has been playing go, an extremely complicated game of strategy and creativity, since he was a small child. He was a ranked professional player at just 10 years old and reach the 9-dan rank — go’s equivalent of Grandmaster — at just 17. The wunderkind has not only beaten the best in the world to become the top-ranked player, but he’s also conveniently beaten AlpahGo’s last opponent, Lee Sedol, more recently than AlphaGo itself. If anyone can represent humanity and beat AlphaGo in this tournament, it will be Ke.

When AlphaGo won its tourney in 2016, much of the hubbub arose from the fact that the victory had been achieved without any handicap. Previously, human players had been given a slight handicap to make things fair for the computer, as go is a very tricky for an algorithm to master. But AlphaGo’s new upgraded A.I. demonstration also includes a couple of novelty matches where AlphaGo sports a handicap of sorts. In one, the machine learning marvel will attempt to take on five go players working together to test its “creativity and adaptability to their combined style.”

Right now, only Google itself knows just how far AlphaGo has advanced since its last appearance, but we know that it learns fast — possibly faster than Ke Lei. AlphaGo wasn’t quite good enough to sweep its tournament in 2016, but that was over a year ago. It’s not hard to imagine a future in which human ability is tested against an A.I. tuned down to a particular difficulty level, or in which human players gang up on software players as a matter of course. AlphaGo is already the first and only A.I. to attain the coveted, highest rank of “9-dan” in go — perhaps it will be first intelligence, period, to motivate the re-creation of the now-defunct “10-dan” level.

While AlphaGo’s apparent dominance of the game brings up age-old issues of the worth of human ability in the age of machines, human players can probably stop worrying. It’s possible to build a fastball-throwing robot that can exceed the world’s best human pitchers in baseball — but we still use human pitchers nonetheless. Chess programs are a fixture of the chess world, but they also have not invalidated the experience of or dulled interest in human play.

As 9-dan player Shi Yue points out in the video above, “the combination of AlphaGo’s machine learning and go, which is an ancient cultural treasure will be amazing to see.”

If you missed the original contest between Se-dol and AlphaGo, check out the upcoming documentary later this month. Ke Jie will face off against the machine during the Future of Go summit from May 23-27.