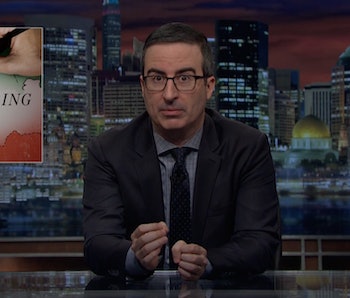 John Oliver wants every voter’s voice to be heard. On an episode of Last Week Tonight that aired Sunday evening, the host explained how years of partisan gerrymandering has led to situations where people’s votes are carved up into strange shapes to benefit governing parties.

“Our voices should be fully heard, even if we’re Scientologists, or parrot heads, or guys who ride unicycles as their primary mode of transport,” Oliver said. “Think about it! Election results should not be the fault of lawmakers’ crazy lines. They should be the fault of our own crazy decisions.”

Take Ohio as an example. The state voted 44 percent for the Democratic Party in the 2014 elections to the House of Representatives, but 12 out of 16 seats went to the Republican Party.

“Those numbers are way out of proportion to what you’d expect,” Oliver said. “You wouldn’t accept Neopolitan ice cream that was 75 percent strawberry. How is that okay?”

In most states, redistricting is done by legislators rather than an independent body. Dr. Jeremy Mayer, an associate professor at George Mason University, told The Washington Post in 2013 that British legislators are shocked when they discover that this is how districts are drawn in the United States.

The Voting Rights Act protects against drawing districts for racial biases, but it does not protect against drawing seats for party political biases. That leads to situations where legislators argue in court that their districting is done specifically with partisan politics in mind.

Both sides are guilty of this. Vince Demuzio, a Democratic member of the Illinois senate, told reporters in footage aired on the show that his team would “sit down and draw a very fair map” before looking away with a smile.

But while some would argue that the bizarre shape of some districts reveal how broken the system is, it’s not necessarily the case that non-square districts are the result of partisan gerrymandering. American communities are not square, and drawing them into squares could cause more problems.

Oliver described communities as “like jazz music. They’re free-form, free-flowing, and they contain a troubling amount of opioids.”

Illinois’s fourth congressional district, shaped like a pair of earmuffs, is one example. Joined at the top by a strip of uninhabited roadway, it’s normally listed as an absurd district. But it joins up two majority Latino communities in Chicago, and it’s emblematic of how there are no easy solutions to gerrymandering that would not involve carving up groups of people.