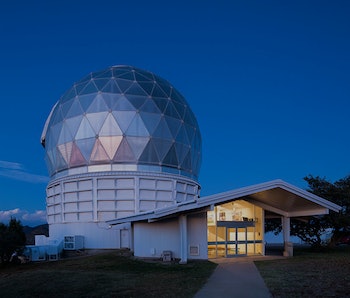 The Hobby-Eberly Telescope at McDonald Observatory in West Texas is one of the largest telescopes in the world. This unbelievably freaking huge piece of astronomical equipment sports a primary mirror that’s 78 square meters in size, and it has an effective aperture that’s 10 meters in diameter. Dedicated in 1997, the HET has just completed a massive upgrade to bring it up-to-date and prepare it to unlock some of the biggest mysteries of our universe. On Sunday the HET board is celebrating the completion of the telescope’s $40 million upgrade with a dedication ceremony.

“The entire Board, as well as the HET astronomy community, are excited about the telescope upgrade and the new science it will enable,” said Dr. Larry Ramsey, chair of the HET Board and professor of astronomy at Penn State, in a press release for the event. The HET is closest to The University of Texas at Austin, but it also involves astronomers at Pennsylvania State University, and the German universities Ludwig-Maximilians-Universität München and Georg-August-Universität Göttingen.

In recent years, dark energy, black holes, and the search for new planets have become really hot topics in the public discourse about astronomy. And in keeping with the times, the HET’s upgrades will better equip the instrument to probe these distant phenomena.

First on the list, the telescope’s field of view has been expanded by 70 percent, so it now captures 120 times more of the sky than before. In this sense, it’s nearly a new telescope. But that’s not all.

In addition to the modification of the optical portion of the HET, it now rocks four distinct instruments that detect light beyond the visible spectrum: the Low Resolution Spectrograph 2 (LRS2), which helps scientists study the chemical composition of faint galaxies and far-off black holes; the Visible Integral-field Replicable Unit Spectrograph (VIRUS), which will help astronomers study dark energy, the force behind the universe’s accelerating expansion; the Habitable Zone Planet Finder (HPF), which will help astronomers detect which distant planets could contain liquid water necessary for supporting life; and the High Resolution Spectrograph (HRS), which is an original instrument in the HET that has now been upgraded to help scientists more accurately study chemical compositions of stars and better characterize exoplanets that have been detected by spacecrafts.

Among many other projects, these upgrades will enable the Hobby-Eberly Telescope Dark Energy Experiment (HETDEX). This project, meant to start later this year, will look back to the origins of the universe to find evidence of how dark energy has changed over 11 billion years.

This is just one of the many experiments that find their homes at the Hobby-Eberly telescope, with scientists competing for time on the telescope. These upgrades will make possible an even greater range of experiments in the coming years.