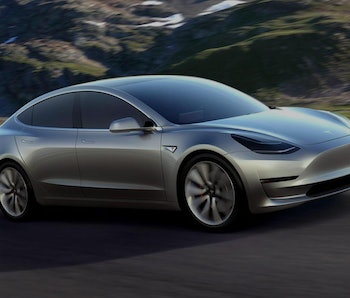 Tesla really, really wants to make sure you don’t think its upcoming Model 3 car is a next-generation version of the wildly popular Model S. A company statement released on Thursday explicitly stated that the Model S and X vehicles still have the most advanced technology, putting a little cold water on a week’s worth of sightings and feverish analyst discussion of the budget Model 3’s features.

“One question we’ve been asked is, ‘Should I trade in my Model S for a Model 3?’,” Tesla said in its statement. “While Model 3 will be our newest car, it isn’t ‘Version 3’ or the next generation Tesla. Our higher priced premium models still include the most advanced technology and the best driving experience we have to offer.”

The company has held a firm line that the upcoming Model 3, a $35,000 vehicle pitched as a budget-level electric car, is not a more advanced version of its currently shipping models. Two weeks ago, CEO Elon Musk took to Twitter and told followers that the car, set to enter production in July, is not a “next generation” Tesla. The car is a lot cheaper for Tesla to make: it has half the amount of internal wiring as the Model S, and only one computer screen where more expensive models have two.

But that hasn’t stopped fans from speculating that Tesla may be hiding something up their sleeve, and this all came to a head earlier this week when a release candidate Model 3 was spotted driving around near the company campus with what seemed to be an extra pair of sensors.

Recent models of the S and X include eight cameras, GPS, radar and ultrasonic sensors, all designed for powering the semi-autonomous Autopilot mode. Tesla is aiming to introduce full self-driving capabilities by the end of this year via a software update, and the Model 3 is expected to offer the same feature when it becomes available.

But the model spotted near the campus appeared to contain two extra sensors on the car’s C-pillar, between the rear door and the back. This would suggest a modified Autopilot setup to the S and the X, even though Tesla has consistently claimed all three cars will receive the same self-driving features.

Along with the fan sightings, one analyst claimed that Tesla is indeed hiding something. Morgan Stanley’s Adam Jonas told CNBC on Monday that the company has been underselling the Model 3’s Autopilot capabilities to avoid hurting sales of its existing cars. The Model 3, Jonas claimed, would come with 19 sensors and feature an Autopilot system 40 times more powerful than the one shipping on the company’s older Mobileye-powered cars, which the company stopped producing last year.

Tesla’s statement is apparently trying to put those rumors to bed, but it’s easy to see why the rumor took hold in the first place. Reservation holders would certainly love to receive a souped-up car from the future, but for now, it appears the Model 3 will indeed ship as simply a stripped-down version of the Model S.