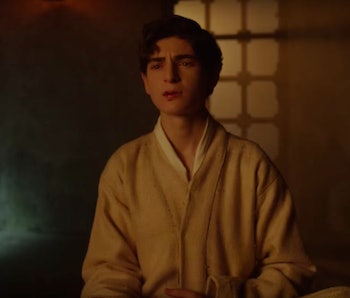 Gotham is a bonkers-ass prequel of sorts that explores what Batman’s city was like before Bruce Wayne became the Caped Crusader. Now, after two and a half seasons, it seems like the show is going to really make some progress on getting Yung Bruce in the cowl.

Fox released a new teaser for the show’s mid season premiere called “The Transformation Begins.” The 30-second spot shows flashbacks of Bruce’s parents getting murdered (you betcher ass there’s a shot of pearls dramatically falling on the sidewalk) and another scene where Bruce gets in a fight with some fellow youths.

Then, after quick flashes of some of Batman’s future rogues’ gallery, we see Bruce in a robe talking with an unidentified master. It’s not Ra’s al Ghul, since Game of Thrones actor Alexander Siddig is already lined up to play that role, but he is some sort of teacher with great plans for Bruce.

“People are afraid, and fear breeds hopelessness. Gotham needs something that you can provide,” he says, prompting Bruce to ask what that is.

“A protector,” he responds.

Batman’s whole thing is that he strikes fear in the hearts of criminals, a notoriously cowardly and superstitious lot, so it’s interesting to see his unknown master warning about fear breeding hopelessness.

The second half of Gotham’s third season, which is being called “Heroes Rise,” airs on April 24, 2017.